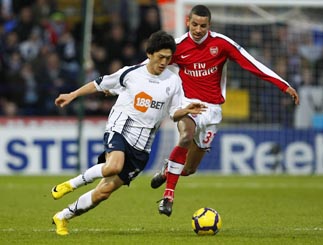 Gary Megson’s successor Owen Coyle lost his debut match in front of the home crowd at the Reebok Stadium in Bolton, England, yesterday, but Lee Chung-yong played one of his finest matches for Bolton so far in his brief English Premier League career.

Former Burnley manager Coyle’s debut match as the Bolton Wanderers’ new manager was spoiled by Arsenal captain Cesc Fabergas, who returned after missing three games due to a hamstring injury to score the opening goal and assist on the second. Fabergas scored the opening goal in the 28th minute and assisted on substitute Fran Merida’s goal in the 78th minute to lead the Gunners to a 2-0 victory.

The lone bright spot for Bolton was rookie midfielder Lee, who found his teammates with accurate passes and stayed active in the offensive zone to be named the game’s Most Valuable Player. The honor is Lee’s third of the season. Having struggled against Manchester United and Chelsea this season, Lee looked confident and composed as he played a prominent role on Bolton’s offense. Lee provided a spark for Bolton immediately as he penetrated the right side of Arsenal’s zone and provided Kevin Davidson with an accurate pass two minutes into the match. Lee continued to find his teammates with crisp passes that could easily have resulted in goals for Bolton.

Despite congratulations by his new manager on a fine game, Lee was concerned about the outcome of the match. “Arsenal is a strong team and they played a good game today. We will face Arsenal again in three days. We would face less pressure if we had won the game today,” said Lee in a post-game interview.

“I am not satisfied with my performance today. When playing against a strong team, it is important to contribute on defense as well as offense. It takes a toll on your body as the game wears on. I felt a bit fatigued towards the end.”

With the new manager in place, Bolton is expected to undergo some changes in the upcoming games, but Lee saw a positive change in the team since the recent managerial switch.

“I don’t think the new manager will make any immediate changes to the lineup until he can fully assess the players,” explained Lee.

With the win, Arsenal inched within three points of league leaders Chelsea. Bolton currently sits 19th in the league standings with a record of four wins, six draws and nine losses.