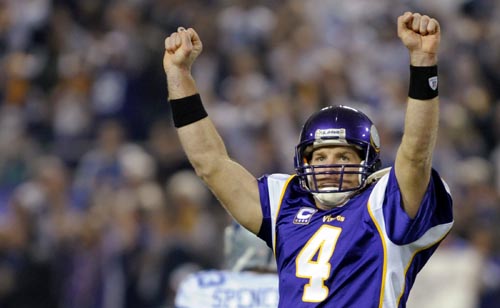 
MINNESOTA - Brett Favre kept his Super Bowl dream dramatically alive by throwing four touchdown passes to lift the Minnesota Vikings to a crushing 34-3 win over the Dallas Cowboys in their divisional playoff on Sunday, Minnesota time.

Receiver Sidney Rice pulled in three of Favre’s touchdown passes for the Vikings, who will visit the New Orleans Saints in the NFC Championship game next Sunday. Forty-year-old Favre, the oldest starting quarterback in playoff history, threw for 234 yards to continue his outstanding season.

“This is what I came back for - this is what the team expected - to be in the playoff. We had to be confident and we had to play outstanding football. It was a great win for us, in all our phases,” Favre told reporters.

The quarterback was expertly protected by his line against a Cowboys defense that went into the game in impressive form.

“Probably the most fatigued or tired I got today was celebrating,” said Favre. “I tip my hat to our guys, they were outstanding up front.

“When you are 40 years old, let’s be honest, if you take a pounding, something is going to give. Our guys have been outstanding. I was concerned [about the Cowboys defense],” he said.

In the end, it was the Vikings’ defensive line that was ruthless, sacking Cowboys quarterback Tony Romo six times. The hits had an impact as Romo fumbled three times and threw an interception, his most turnovers in a game since the second week of the season.

“It’s not rocket science, when the front four are pressurizing you it makes it difficult,” Romo said.

Favre, whose four touchdowns were a personal best in the playoffs, found Rice twice in the first half with expertly floated passes, and the Vikings were up 17-3 at halftime. Minnesota put the game beyond Dallas with Rice’s catch on a 45-yard pass from Favre in the fourth before making the win even more decisive through Visanthe Shiancoe on another looping throw from Favre.

The Cowboys did not help themselves with two missed field goals from kicker Shaun Suisham, but it was the lack of protection for Romo that cost them.

“It had a lot to do with pressure, it seemed like Tony was running for his life a lot,” said Wade Phillips, the Cowboys’ head coach.

For Favre, the matchup in the Louisiana Superdome will be another emotional occasion in what is a remarkable comeback campaign. Born in Mississippi, Favre was a Saints fan in his youth and the stadium was also the scene of his sole Super Bowl triumph at the end of the 1996 season. Favre said he was happy with his decision to change his mind over retirement and insisted he was loving every minute.

“The enthusiasm and passion you see is real - the guys feed off that and fans enjoy that because it is real and genuine.

“You can’t fake that, you can try but people will see right through it.”