Too cold outside, and too hot at home

Too cold outside, and too hot at home

The family of Ahn Seung-il, the 46-year-old owner of a design company, had their eyes glued to the TV one Sunday afternoon in the living room of the family’s apartment in Nowon District, northern Seoul. The temperature outside had dropped to nine degrees below zero Celsius (16 degrees Fahrenheit), but the four-member family was in T-shirts and shorts.

Their attire came as little surprise, as the living room was found to be a balmy 28 degrees.

“Normally, I don’t know the exact temperature of my house because we use a valve to control temperature here,” Ahn said.

“That’s why we just keep the rule simple here. We keep the room temperature warm enough to wear short sleeves and shorts.” 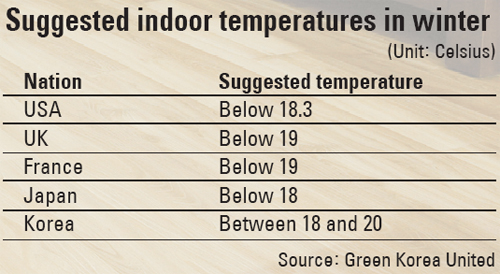 Ahn’s wife, Kim Tae-suk, 42, said she rarely turns off the boiler as her two middle and high school children are on winter break and are at home more than usual. But she admits it’s way too hot when she does housework.

“I guess I will get higher heating bills this month, because I’ve been keeping the house warm like this because of the cold spell,” Kim said.

Many Korean families keep their house far too warm, like the Ahns. Compared to other advanced nations such as Japan and France, Korean households use an overwhelming amount of energy.

That’s why many Koreans confess they are used to wearing shorts inside their apartments in winter.

It’s not just homes that use too much energy. Customers in department stores often take off their coats after finding it too hot to walk around the shops. Even some local district offices are no exception.

When the cold spell reached its peak, with temperatures hitting minus 14.4 degrees Celsius last Thursday afternoon, thermostats in the information center at Gangnam District Office Station on line No. 7 were set to keep the office at 28 degrees Celsius.

When the information center official was asked whether he was aware of the government guideline, he said he hadn’t receive any specific orders. There was also an electric space heater beside his desk in addition to the central heating.

JoongAng Ilbo reporters checked the temperature at 11 government offices, shopping malls, fast-food chain restaurants and book stores, and the average temperature was 22.6 degrees Celsius, slightly above the 20 degrees that is considered the peak advisable winter temperature.

One fast-food restaurant located in COEX in Samseong-dong, southern Seoul was 26 degrees Celsius. That’s the temperature that Seoulites normally experience in the middle and end of July.

“When I first got in here, I felt that the temperature was just right,” said Seo Se-jeong, a college student. “But I realized that it’s a bit too hot when I was strolling around. I think it would be okay if they lowered the temperature a bit.”

Health experts warn that the overuse of heaters can actually increase your risk of catching the flu, because it widens the temperature gap between the inside and the outside.

Particularly in the dryness of Korea’s winter, when the room gets too hot, the air dries out. This can cause dermatitis or inflame existing conditions such as eczema.

Many experts say the ideal way of keeping warm indoors is to layer up and keep the temperature in the house between 18 and 20 degrees Celsius.

“Because electricity charges are relatively cheap, many people don’t recognize the importance of energy,” said Jeong Han-gyeong, a researcher at the Korea Energy Economics Institute.