Young officer in coma after being hit by drunk driver

Young officer in coma after being hit by drunk driver 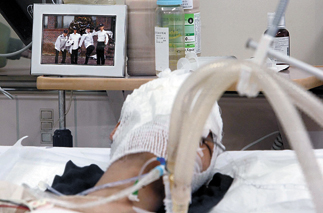 Auxiliary police officer Kim Ji-hun, who was hit by a drunken driver while on duty, lies at the Samsung Medical Center in Gangnam, southern Seoul, on Tuesday. He has been in a coma since Dec. 11, when the accident took place. A photo taken with his colleagues is shown at his bedside, with Kim at the far left. By Oh Jong-taek

A dream of becoming a career police officer has been dashed for Kim Ji-hun, 21, who was hit by a drunken driver at a road block while serving his military service as an auxiliary police officer.

On Dec. 11 at around 10 p.m., Kim and three fellow policemen were on duty in Seosan, South Chungcheong. A car approaching the checkpoint they were manning suddenly backed up and made a U-turn, hitting Kim, who was standing in the opposite lane. Stuck under the car, he was dragged about 700 meters (2,296 feet) until another car blocked the runaway vehicle.

The driver of the fleeing vehicle was found to have a blood alcohol content if 0.102 percent, a level at which a driver’s license is revoked.

In Korea, operating a vehicle with a blood alcohol content of 0.05 percent or above represents driving under the influence, and results in a temporary license suspension. A license is revoked at 0.1 percent or above.

The friction between Kim’s body and the road resulted in the skin on one side of his head being peeled down to the bone. He also lost most of the skin from his back, thigh and elbow. His right eye, was burned by the underside of the car’s engine.

He had to undergo major surgery, during which parts of his brain had to be removed. Doctors have said it will be impossible for him to resume a normal life, even if he recovers.

Kim has been in a coma for over a month in an intensive care unit at the Samsung Medical Center in Gangnam, southern Seoul, breathing with the help of a respirator.

Heavy layers of bandage are wrapped around his head and a tube runs into his nose. His entire body is disinfected in an operation room every day, starting at 10:30 a.m.

Kim’s mother, Pyeon Gyeong-geum, 45, has been forced to quit her job selling food from a street cart in Hongseong, South Chungcheong, because of the accident. When she visited the hospital to see her son, Kim’s colleagues blocked her from entering the room due to the shock she would be sure to receive from seeing the injured young man.

Pyeon is renting a small room near the hospital in order to take care of her son. Doctors have said he will have to remain in the hospital for a long time.

She said her son was proud of serving the country as an auxiliary police officer and wanted to go on to become a real policeman.

“I can still remember the time my son came home for the first time wearing his police uniform,” Pyeon said. “He showed up and said how great it felt to be in uniform. He kept looking at himself in the mirror.”

Whenever Kim was on leave, he would help his mother by carrying heavy supply orders to the food cart.

“My son told me that he would buy a house for me after he makes enough money. He told me just to wait for a while,” she sobbed.

Due to the family’s economic situation, Kim decided to serve his military service right after high school. He is scheduled to be discharged in September.

According to the National Policy Agency, nearly 100 policemen are either injured or killed every year while checking for drunken drivers.

“Drunk driving is both suicide and murder,” said Kang Jeong-suk, 51, head of an organization of policemen’s parents. “[Police officers] are exposed to dangerous inspection spots without being equipped with safety tools.”

Police said the driver who hit Kim had been on his way home after drinking with a woman.

“The driver kept saying he remembers nothing about hitting Kim,” said an investigator who asked not to be identified.

In a separate case from 2006, a drunken driver in his 40s killed a police officer with his vehicle. Holding on to the car door, the officer was dragged for 1.5 kilometers (1 mile). The driver collided with the meridian to knock the officer off the car. The offender was driving without a license, and the Suwon District Court in Gyeonggi sentenced him to 18 years in prison.

The NPA said drunken drivers with second convictions in Korea accounted for 39.2 percent of all criminal offenders last year.

Experts say measures to stop drunken driving have to be strengthened. Grand National Party lawmaker Park Jun-seon introduced a revised traffic law last November under which drunken drivers who have their licenses revoked after being caught three or more times must have anti-drunken driving systems installed in their cars.

Police are planning to provide officers with vests that have LED systems installed in them so they will be more visible on dark roads.

Meanwhile, Pyeon still maintains hopeful that her son will recover.

“Yesterday I saw my son’s arm move slightly,” she said. “His arms are the only parts that are not hurt. They are normal. I think he held onto something under the car with his arms in order to survive. I will keep taking care of my son until he recovers.”