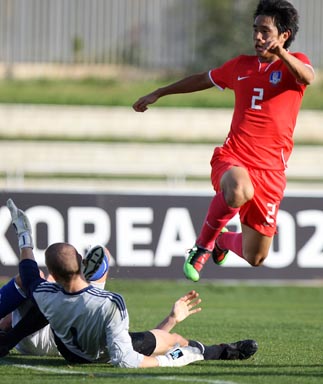 Huh Jung-moo and his men seemed relieved after defeating Finland 2-0 in Malaga, Spain, early yesterday. The win came after a lackluster camp in Rustenburg, South Africa, in which the Korean players looked fatigued and overmatched.

Huh was pleased to see his team muster a win to break a two-match losing skid that dated back to a 1-0 loss against Serbia last November. Their most recent loss was 4-2 against Zambia earlier this month.

The Korean defenders did not allow a goal, and also chipped in with two goals to help Korea to a win. Fullback Oh Beom-seok scored the opening goal in the 39th minute and center defender Lee Jung-soo added the team’s second goal in the 54th minute off No Byung-jun’s cross.

“Our players did not start off well. I saw that some of them struggled to get adjusted to the surface of the stadium,” said Huh in a post-match interview. “Once they got comfortable, they played well. Considering the amount of training time we’ve had so far, I am satisfied with the results.”

Much like the Korean team, which was missing its overseas-based players, Finland was without its best men. Regardless, Korea’s defense did not give up a goal for the first time in the current overseas trip, and veterans Lee Dong-gook and Kim Do-heon played well.

Coming off a two-goal effort in the friendly match against Bay United in Port Elizabeth, South Africa, Lee showcased some of the skills that earned him the top scoring title in the K-League in 2009. Partnered with Yeom Ki-hun up front, Lee looked focused and stayed active in playing the entire 90 minutes.

Lee threatened Finland’s goal with a header a minute into the match and created several quality chances throughout. In addition to heading Korea’s attack, Lee also contributed on defense, in some cases running well past the center line to track down Finnish midfielders.

Huh, who had been reserved in complimenting the veteran forward, seemed impressed yesterday, saying, “He deserves compliments for his aggressive play on offense and contribution on defense.”

Kim also stood out in the midfield, where he orchestrated the offense and dictated the match’s tempo. The former West Bromwich Albion player had a key role in shifting the momentum of the game from the moment he was substituted into the match in the 35th minute.

Korea will round out its current overseas training camp with a friendly game against Latvia on Friday at 11:30 p.m., Korean time. Finland and Latvia have both failed to qualify for the 2010 World Cup, but Huh and his coaching staff hope the experience against the two teams will help their team prepare for their World Cup matchup against Greece.

“The Finnish players were not in great physical condition for the match. However, the game provided the team with the opportunity to get acclimated to the physical style of play of European teams,” said Huh.