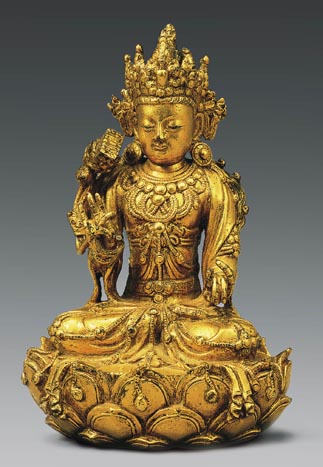 Throughout the history of humankind, gold and silver have been regarded as the most alluring metals whose colors symbolized richness and elegance. In the realm of religious art, gold and silver were popular materials. Buddhist artworks in gold and silver exhibited the craftsmanship and aesthetics of the time.

The exhibition “Eternal Light: Gold and Silver” at the Horim Art Center in Sinsa-dong, Gangnam District, southern Seoul, gives visitors a glimpse into the world of Buddhist art, and includes ornaments, sculptures, crafts and household goods, all created in gold and silver. The center also has a separate but related exhibit titled “Metal Soundscape” by Jinnie Seo, a contemporary installation that uses metal fences and sound in artifacts such as bells and gongs. The secondary exhibit attempts to make a connection between ancient artifacts and modern art.

opening in June 2009 as a branch of the Horim Museum in Gwanak District, southwestern Seoul.

The most important artifacts in the exhibition are replicas of a sutra and Buddha statues. There is one National Treasure and nine Treasures on display.

The Saddarmapundarika Sutra, a replica of a sutra made in 1377 in Goryeo (918-1392), is National Treasure No. 211. The piece is almost perfectly preserved. On the opening page of the book, there is a golden painting of Buddha giving a sermon before his followers. On the left, there is a description of the event written in black ink.

The Avantamsaka Sutra from 1334 Goryeo, Treasure No. 752, is another masterwork. Gold powders are attached to the black paper with glue. Each letter was written by hand rather than printed.

It, too, is a replica. It was said to have been made with the utmost sincerity and it was said the person who wrote the text kneeled and bowed each time he wrote a letter. The painting depicts a bodhisattva, or a Buddhist saint, in the center surrounded by other saints listening to Buddhist teachings.

The exhibit also displays several gold-plated Buddha statues. The gilt-bronze Seated Mahasthamaprata from 14th-century Goryeo is Treasure No. 1,047. It is almost perfectly preserved.

“With its delicate carvings, this is one of the most outstanding Buddha statues from Goryeo,” Yu Jin-hyeon, a curator of the exhibition, said of the statue.

There are other gilt-bronze statues on display, some whose gold layers have peeled off because, as Yu explained, “Gold does not corrode, but bronze does.”

There is also a rare Buddhist painting from Goryeo. The work “Boddhisattva and Attendant” from the 14th century Goryeo shows a Buddhist saint who saves living things from hell and sends them to heaven.