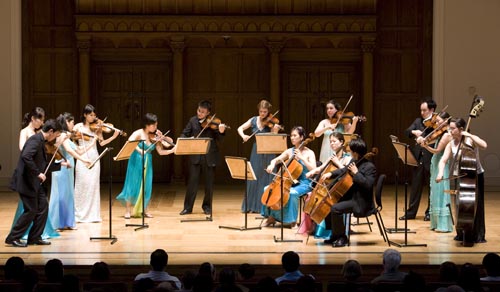 The Sejong Soloists, a group of musicians from all over the world, present their New Year’s concert this weekend to help the newly-refurbished Hoam Art Hall celebrate its 25th anniversary. See MUSIC, below. Provided by Credia

Friday: “The Forest.” The Forest, a band that creates fusion gugak, or traditional Korean music, was formed in 2001, a year that saw the emergence of several new entrants in the genre. The Forest was among the pioneering bands that attempted to broaden the audience for gugak music.

The band comprises six traditional musicians and three contemporary musicians, each of whom specializes in a different instrument, including gayageum, daegeum, guitar and keyboard.

Capable of producing many different styles of music, The Forest is not restricted to any specific genre.

At this concert, The Forest will play songs from their recently-released third album.

The concert is also the first to take place at the Hoam Art Hall after six months of renovations and equipment upgrades.

Comprised of seasoned musicians from around the world, the Sejong Soloists are undoubtedly one of the most active and talented orchestras in Korea. The first segment of the concert on Friday will feature a standard ensemble playing compositions by Handel, Mendelssohn and Earl Kim, while the second segment will be a battle of the soloists, who will present a number of compositions.

Saturday: “Duo Recital - With Your Soul Shadow.” Four prominent pianists collaborate in this concert. The four musicians - Kim Hyo-jin, a professor of music at Sookmyung Women’s University; Lee Ji-Hyeon, a Michigan State University alum; Oh Seong-taek, a professor of music at several universities and academies; and Kim Ah-sa, a music researcher and a scholar at Konkuk University - are highly regarded in Korea’s classical music community.

The program will include compositions by Mozart, Ravel, Bach, Saint-Saens and Piazzolla.

Saturday: “2010 Vienna Boys Choir New Year’s Concert.” The history of the Vienna Boys Choir goes all the way back to 1498, when Emperor Maximilian I moved his court and court musicians from Innsbruck to Vienna along with instructions that there be six boys among the musicians of the court.

Today, the group consists of 95 choristers between the ages of 10 and 14, divided into four touring choirs.

During their tours, the groups travel to European countries, and they make frequent stops in Asia, Australia and the Americas.

Their repertoire spans five centuries of music, from the Renaissance to contemporary times. Many of members of the choir have gone on to become professional musicians, conductors or singers throughout the world.

For this concert in Korea, the choir has prepared a selection of Korean folk songs as well as their usual repertoire of classical church and choral music.

Thursday to Friday: “Root, Empty Space, One Second.” Established more than 20 years ago, the Ahn Ae-soon Dance Company is one of the best known and most acclaimed dance companies in Korea today.

While individually fascinating, the compilation of all three works displays the diverse dance styles embraced by the choreographer during its respective time period.

Her pieces are often based on complex and thought-provoking themes that keep audiences engaged even after they leave the theater.

While most late 18th-century operas were based on the styles of the then-popular Baroque movement, Mozart insisted on using his own experimental style to create the compositions that make up the work.

After its introduction at a theater in Munich in 1781, Idomeneo became one of Mozart’s favorite works.

Later it provided the inspiration for many of the great operas we know today.

The most revered maestro in Korea, Chung Myung-whun, will conduct this opera. As an avid fan and performer of Mozart’s music, Chung will use his virtuosity to lead this grand production by the National Chorus of Korea and Seoul Philharmonic Orchestra.

Friday and Saturday: “Human Comedy.” This is an ensemble theater piece comprised of three different plays that chronicle different aspects of life in Korea.

All three plays are light in tone, although some parts are more dramatic than others.

Each segment of Human Comedy portrays an episode that could happen to any ordinary family, from struggle and love, to efforts to overcome hardship.

Audiences will surely appreciate the value and efforts that have been put into the show.

Saturday to April 25: “All That Jazz.” Chungmu Art Hall is hosting an ambitious jazz musical through April 25.

This is neither a remake nor a restaging of the 1979 American musical film of the same name, but an entirely new musical production created from the ground up by the producer, Park’s Culture.

All That Jazz brings the glamour of a large-scale Broadway production into the more intimate and lively space of a small theater.

With its compelling story and interesting characters, the show puts great emphasis on establishing an emotional connection between the audience and the performers.

While All That Jazz contains all of the elements of a good musical, it also strikes a balance between music, dance and theatricality.

The musical numbers have been well crafted and are performed by an energetic and talented ensemble.

The musical starts at 8 p.m. Tuesdays to Fridays, and at 3 and 7 p.m. on weekends. There are no performances on Mondays.

Entitled “Maze,” this new work from the critically-acclaimed choreographer examines the parallel relationship between reality, referred to as “space,” and the surreal, referred to as “maze.”

Founded in 2000, Cie Yu Dans Company initially only performed in Europe until they expanded to Korea in 2008.

The company’s founder and director, Yu Yeon-ah, trained and worked in Germany and elsewhere in Europe.

Since her return, she has been an active participant in the Korean dance community.

This highly-anticipated new work will help launch another year of innovative dance in Korea.

The performance starts at 5 p.m. on Sunday and 8 p.m. on Monday

Jan. 28 to 31: The 12th Inje Icefish Festival will be held at Soyangho Lake in Inje County. At this spectacular winter festival visitors will be able try their hand at ice fishing and fun and exciting games, including human bowling on ice, ice soccer and even a tug-of-war on ice. For ice fishing fanatics and people who like smelt, there will be a fish-eating competition. Festival-goers can compete and then sample their freshly-caught fish for free.

To get to the festival, take a bus from Dong Seoul Bus Terminal, located at Gangbyeon Station, line No. 2, to Inje Bus Terminal. The travel time is approximately two hours.

From the bus terminal it takes about 10 to 15 minutes to reach the actual festival grounds, but during the festival period, a complimentary shuttle bus will be in operation. Shuttle buses will operate from 8:45 a.m. to 4:55 p.m. at 30-minute intervals.

The festival grounds are divided into three areas. Visitors can dive into a field of snow to make snowmen or go sledding at the “Ice Village.” Beautiful Christmas decorations await visitors at the “Snow Light Village.” The “Play Village” will screen 3-D movies and also contains a number of exciting games and rides.

The Supia White Festival has events, attractions and activities for everyone.