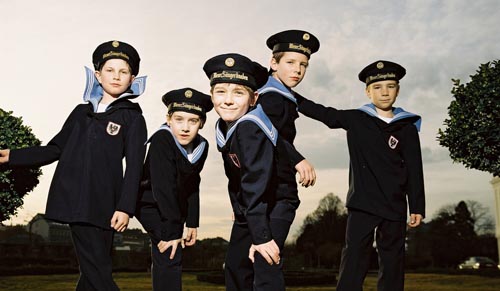 The Vienna Boys Choir performs its New Year’s Concert this weekend in Seoul. Provided by the organizer

The Vienna Boys Choir is back in town just in time to ring in the New Year. The choir, which is based in Vienna, Austria, is known for its angelic renditions of spiritual songs. They are now on a five-city tour across the country, with a concert in Seoul slated for this weekend. This will be the choir’s 14th visit to the country since 1978.

The choir was created in 1498 and was attached to the Austrian court. It currently consists of about 100 boys between the ages of 10 and 14. Due to its size, the choir is divided into four subgroups named after Austrian composers: Bruckner, Haydn, Mozart and Schubert.

Last year, the Schubert Choir performed in Korea. This year, the Mozart Choir will perform, so those of you who went to last year’s concert may still find, or hear, something different in the upcoming show.

The Vienna Boys Choir holds about 300 concerts a year around the globe, reaching around 500,000 people. They spend about 11 weeks a year overseas, which has earned them a reputation as the “cultural ambassadors” of Austria.

The choir not only travels extensively, but also tries to learn something new about the cultural heritage of each country in which it performs. It often performs one or two traditional tunes indigenous to the region alongside the other songs in its repertoire.

Last year when the Schubert Choir came to Korea, the program included the Korean folk song “Arirang.” This year, the Mozart Choir is also expected to sing a traditional Korean song, as well as Austrian, Indian and Pakistani folk and spiritual songs.

The choir’s inclusion of these songs has helped broaden the musical knowledge of many young audience members. As a private artistic institution, the choir has also become known as an exemplary venue for arts education, something that is bound to capture the attention of parents in Korea, a country obsessed with education.

The Vienna Boys Choir provides classes for its members, who range in age from kindergarten to middle school. The curriculum includes musical training, academic lessons and physical education. And the classes don’t stop while the group is on tour.

Last Thursday, members of the Mozart Choir visited the Seoul Museum of Art to see the exhibition “Andy Warhol, the Greatest,” in what organizers said was a “meeting between the king of pop art and the angelic voices of the choir members.”

“When they don’t perform or practice, the members of the choir participate in various cultural events so that they can see and experience as many things as possible,” said Huh Ji-yeon, a representative of the local concert organizer.