Striking out into the ‘unknown’

Striking out into the ‘unknown’ 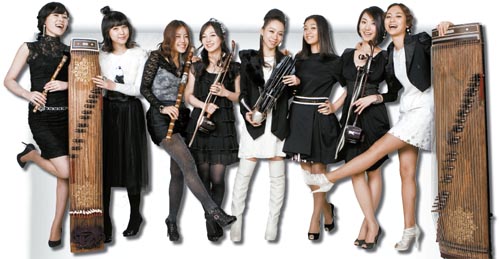 Asian musical groups have been mixing traditional instruments and pop for years now, creating a new, unique sound - a goal Miji makes explicit in their name, which means “unknown.”

But this is no fringe bunch content to play public theaters and coffee shops. The eight-member all-female ensemble hopes to become known as “the Girls’ Generation of traditional Korean music.” Miji’s members are all between age 22 and 28, and their instruments include the haegeum fiddle, the bamboo woodwinds the daegeum and sogeum, and the gayageum zither. They even play less well-known instruments including the reed-based saenghwang. The group’s seven instrumentalists and one vocalist released their first full-length album on Jan. 14.

For all their aspirations to uniqueness, Miji was formed just like any other Korean pop group. In August 2008, the three-stage audition process began, leading up to the finals in September, which went on for two nights and three days. All the finalists lived together during that time to get a sense for how they would interact. 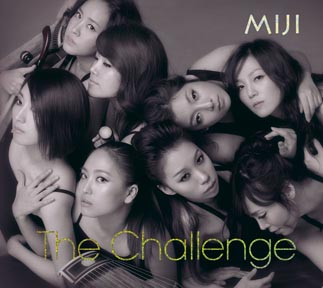 The eight who made it have spent the last year and a half honing not only their musical skills but their performances and sex appeal, part of a strict regimen by their record label Loen Entertainment. The girls learned foreign languages and swam laps to keep in shape. Their waistlines were measured constantly. There were even limitations on how much they could use the Internet.

There are already plans for Miji to perform for delegates to the G-20 summit to take place in Seoul this November. In December, the plan was reported to President Lee Myung-bak’s Presidential Council on Nation Branding.

Even the Ministry of Culture, Sports and Tourism has something riding on Miji’s success, working with Loen to make Miji into poster girls for traditional Korean music not only here but also overseas.

At a photo shoot, the members showed a level of maturity, but they were also very youthful and animated. The eight had clear, loud voices and almost sound like one - surely another result of their training. Their movements for the photos were consistent and in sync. Each of them knew what to do in front of the camera, and every time the camera shutters would click, their facial expressions would change.

They’re called a girl group, but most of them are around 26 years old. One reporter pointed this out, saying, “You’re a little old to be called Girls’ Generation.” A Miji member laughed and said they were actually “Women’s Generation.”

It goes without saying that these eight don’t look like the typical classical musicians. Their black and white clothing is stylish and modern, and their jackets, skirts and long boots were a far cry from what Koreans are used to from their traditional performers.

“One of their wardrobe concepts was to show a sophisticated and sexy look,” said their manager, Kim Myeong-beom.

The most traditional element is, of course, the instruments themselves.

This resistance to the old-fashioned shows in Miji’s music as well, which according to critics sounds more like pop ballads than traditional Korean music.

“We want to go outside the boundaries and try to avoid the feelings of boredom and frustration that can sometimes occur when you listen to traditional Korean music,” said the leader of the group, Nam Ji-in. “We wanted to keep the unique melodies that emanate from the instruments, and at the same time also have a more appealing melody for everyone.”

The way Miji writes and composes is very unusual. Their first full-length album, “The Challenge,” has a total of 12 songs, with 10 fusing pop, classical and traditional music. The remaining two tracks are more mainstream and sound more like ballads peppered with some traditional instrumentation and vocals.

Composer Lee Ji-soo and songwriter Jo Young-soo are the creative team behind Miji. Lee was the music director for the drama “Winter Sonata” and for films including “Lady Vengeance,” “Oldboy” and “Silmido.” Jo has composed songs for SG Wannabe, Shinhwa, Lee Seung-chul and Lee Seunggi, among others.

After Lee and Jo finish their work, the members take the music and sharpen it on their instruments before playing it with a Western orchestra. At one point, the group even played with the Czech Philharmonic Orchestra.

Kim Bo-seong is the group’s vocalist, and she gets her biggest chance to shine on “Heunoni,” a sad ballad about missing someone backed by traditional instruments, guitar, drums and bass - all composed by Jo Yeong-su. The combination of all these unlikely elements produces a more familiar sound than might be expected. Another main track, “K.new,” showcases the haegeum and gayageum, balancing Korean melodies against modern influences.

On New Year’s Eve, the group performed in a televised appearance outdoors, despite the minus 14 degree Celsius (7 degree Fahrenheit) weather.

“I was so cold that my hands started to hurt,” said gayageum player Jin Bo-ram. “But when I got up on stage, I saw the crowd looking up at us and that made me realize that we had finally made it up here. That feeling made me forget about the cold.”

After suffering through so many trials, the members are enthusiastic about finally getting up on stage, not only in Korea but elsewhere, too. Still, some critics accuse Miji of not representing the true spirit of traditional Korean music.

“When people would see me play the hae-geum, they thought it was an ajaeng [another Korean instrument], and that upset me,” said member Lee Gyeong-hyeon. “I wanted to succeed.”

Unique experimentation doesn’t always necessarily equal success, but Miji is very ambitious and these women are determined. When asked about their dreams, some responded that they wanted to represent traditional Korean music to the world, and wanted to show people the softness it can bring.

But one member, Shin Ja-yong, had a peculiarly specific wish.

“We’ve always wanted to perform live as Kim Yu-na skates on the ice,” she said.