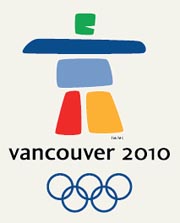 Korea regularly fields strong short-track speed skating teams at the Winter Olympics. But the country did not win its first medal in the event until Chae Ji-hoon hit the gold in the 500-meter event at the 1994 Winter Games in Lillehammer, Norway.

Since Kim broke that barrier, Korea has earned another 17 medals in short-track races - the only event in which it has won medals at the Winter Olympics.

With great expectations come great burdens, and now pressure is building for the men competing in the short-track events at the Winter Games in Vancouver, Canada, next month.

The veterans on the squad, Lee Ho-suk and Sung Si-bak, have a lot to live up to. 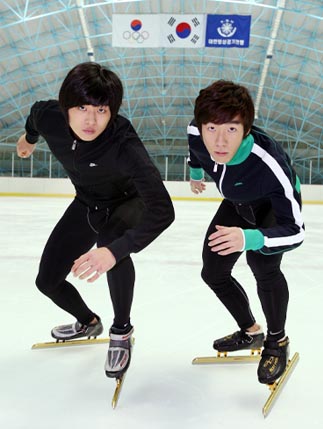 Lee Ho-suk, left, and Sung Si-bak take a break from their training to strike a pose for the camera. By Lim Hyun-dong

For Lee, the 2006 Torino Olympics was a bitter lesson in what could have been. After losing to Ahn Hyun-soo in both the 1,000- and 1,500-meter events, Lee had to settle for second place.

“Ahn Hyun-soo’s technique was so far ahead that I could not catch up to him,” Lee remembered.

But this year, Ahn failed to qualify for the national team due to injuries, and Lee has become the ace of the men’s squad. He has his sights set on the gold this time around.

“I was content with my silver medal in the 1,500-meter because I was excused from mandatory military service for the effort. I am now targeting gold medals in both the 1,000- and 1,500-meter events,” Lee said.

In what could be a preview of things to come, Lee placed first in both the 1,000- and 1,500-meter and relay events at the International Skating Union World Cup event in Goyang, Gyeonggi, last Sept. 24-27.

If he can repeat that performance in Vancouver, it will be a replay of what Ahn achieved in Torino four years ago.

“I don’t plan to focus too much on placing first. It can actually work against you,” said Lee. “I will try to work toward my own goals regardless of what Ahn has achieved in the past.”

Sung has more to prove in Vancouver. Four years ago, he failed to make the final cut and had to watch his fellow skaters on television.

It was a crushing experience, and Sung contemplated stepping away from the sport, even pondering studying abroad.

“I came to the conclusion at the time that I needed to finish what I had started,” recalled Sung.

With his eyes on the Vancouver Olympics, Sung worked toward his goal and finally made the national team last April.

“It was difficult to watch the Torino games on television. All I could think of at the time was making the national team,” said Sung.

“Sung has a great burst of speed off the starting line, and it’s not a stretch to expect a gold medal from him next month,” said the United States short-track head coach, Chun Jae-soo.

With the Winter Olympics less than a month away, Lee and Sung both agreed their teammates are their biggest competitors.

“We fear Korean skaters the most. All members of the short track team are capable of winning a medal,” said Sung.