A good show can’t save a bad game concept

A good show can’t save a bad game concept 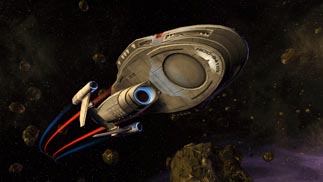 Why do I keep doing this to myself?

I have tried to participate in the supposed online social revolution that is the massively multiplayer online roleplaying game. I’ve loaded up various elven/dwarven/orcish characters in a dozen bland fantasy settings. I’ve taken aim at baddies in sci-fi worlds like “Tabula Rasa” and “Anarchy Online.”

Every time I have been bitterly disappointed, convinced anew that the MMORPG is nothing more than a way to dispose slowly and joylessly of excess time and money. Developers have promised interactive missions and changing settings, yet every “game” still forces the player to kill low-level NPCs - be they thugs, birds, gophers, whatever - in cookie-cutter missions over and over with no suspense or purpose. I suppose it’s hard to fault them, since no one seems interested in being part of a story anyway.

Still, I continue to fail stubbornly to learn my lesson, convinced that one day a game will come along to fulfill the truly awesome potential for an enormous story being told by hundreds of players at once.

And I went into “Star Trek Online” honestly expecting to have a pretty good time, since it was created by Cryptic, maker of the only MMORPG I have ever enjoyed - “City of Heroes” - and I am an incurable Trek fanatic.

So when the open beta started last week I stayed up to download the client and logged in, creating my long-haired brunette Bajoran Starfleet captain and shoving her out into space.

But within minutes of clearing the character creation screen, I was having flashbacks to “Eve Online,” which is perhaps the most accurate simulation of what it’s really like to be an astronaut that will ever be achieved on the PC, in that nothing much happens most of the time and if you play it long enough, your muscles will atrophy.

Part of the problem: Star Trek is uniquely bad source material for an MMORPG. City of Heroes drew me in with its infinite, playful customizability - the superhero is inherently slightly nuts, and so it was totally acceptable to create a borderline obese man in fuschia lycra with part of his brain exposed and the power to throw ninja stars. But in Star Trek Online, you’re part of a military (be it Starfleet, the Klingons, the Gorn, etc.) and you wear a uniform, and the fact that you can customize it seems merely odd.

Another problem: Star Trek Online, like all MMORPGs, focuses on combat, but no fan watches Star Trek for the combat. We watch “Star Wars” for the dogfights and duels; but we watch Star Trek for its thought-provoking, optimistic take on modern moral quandaries. The technology of the respective franchises reflects this: Star Wars has X-wing fighters and light sabers; Star Trek has giant, lumbering starships and non-lethal phaser blasts.

So Star Trek Online focuses on what was by design the single dullest aspect of the TV shows, with many odd contrivances crammed in to force the show to fit the genre.

I know the poor addicts who burn their monthly $14.95 as a sacrifice to the MMORPG gods won’t care about any of this - they don’t mind if a game is no fun. Still, who knows. Maybe the Star Wars game due out next year will be better.