Bonds of brotherhood, on and off screen

Bonds of brotherhood, on and off screen 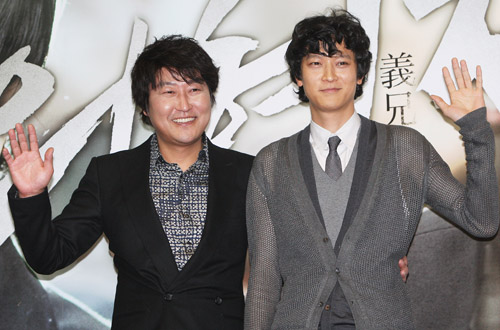 Director Jang Hun, actors Song Kang-ho and Gang Dong-won, from left, speak about their new film “Secret Reunion” at a press event in central Seoul on Jan. 5. Provided by Showbox

Two critically-acclaimed Korean actors are appearing together in an upcoming movie that touches on the inter-Korean issue.

The film, by director Jang Hun, whose debut feature was “Rough Cut” (2008), tells the story of two men who reunite six years after their first encounter, which involved a gunfight between the two Koreas.

Lee Han-kyu (Song Gang-ho), a National Intelligence Service agent from the South, was discharged after the inter-Korean incident. Six years later, he accidentally runs into Song Ji-won (Gang Dong-won), an agent from the North, who was also dismissed and then abandoned by his government after the incident. The two discover they have more in common than just their dismissal and the plot follows them as their relationship changes and they go from enemies to friends. 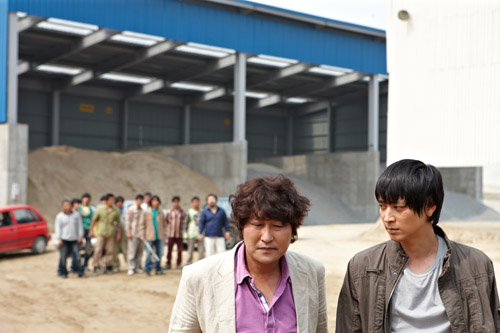 There have been many Korean movies and dramas about the NIS and secret agents. In the most recent version of this plot line, Lee Byung-hun plays a National Intelligence Service agent in the hit KBS-2 drama “Iris.”

So what makes Secret Reunion different from the rest?

“The film doesn’t actually deal much with secret agents and their lives. In fact, the characters’ positions as secret agents serve more as a device to develop the story,” Song said in a press event held earlier this month.

Jang also made it clear: “Secret Reunion revolves around South-North relations, but it takes a brighter attitude toward the subject than you might think. I hope that audiences will enjoy this movie, which reveals a lesser-known side of our society through characters that are interesting.”

Some may also wonder what enticed actors like Song and Gang to become involved in a film by Jang, who is relatively new to directing.

Song had a well-considered answer.

“I admired Jang’s ability to make a movie that was as good as ‘Rough Cut’ with such a relatively low budget,” Song said. “Jang has the ability to express what he wants to say, even though he is a new director.

“I’ll let the audience have the final say on whether the movie is first rate, but personally, I think Secret Reunion is a heartwarming and enjoyable movie,” he added.

When the two actors - who said that they built a bond of brotherhood while they were shooting the movie - were asked their opinions of one another, Song said, “Gang is known for his good looks, but he is a guy who has more than that. I like his sense of humor and his confidence in himself as an actor.”

“I’m in awe of Song’s instincts as an actor and his accuracy,” Gang said.