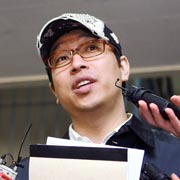 The latest incident involving Kang Byung-kyu, 37, a baseball pitcher-turned-TV entertainer, and Chung Tae-won, the executive producer of KBS-2’s hit action-drama “Iris,” took another turn on Tuesday when the Seoul Metropolitan Police Agency announced Kang had been booked without detention on assault charges.

The same day, police also released their analysis of a video of a fight between the two last month.

The incident is related to a feud between Iris star Lee Byung-hun and his ex-girlfriend Kwon Mi-yeon, a former Canadian gymnast. Kang was rumored to have urged Kwon to file a lawsuit against Lee.

The police said that the video footage, captured last month by CCTV cameras on the set, shows Chung and an associate holding baseball bats over Kang, who is later seen dragging the associate out of the shot.

Kang says he visited the Iris set on Dec. 14 to talk to Chung about the rumors, which Kang has accused Chung of starting.

While Chung alleges that Kang brought “gangsters” to the set and was violent, Kang maintains that the people who accompanied him were his friends and that he is the victim, not the perpetrator, in the incident.

Police said Kang’s involvement would be clarified in court.