Heroes in their adopted country

Heroes in their adopted country 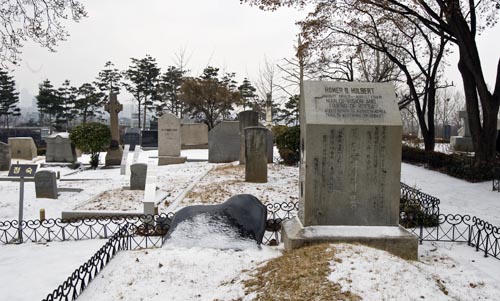 Some 400 people who contributed to Korea’s development are buried at Yanghwajin Foreign Missionary Cemetery in Hapjeong-dong, northern Seoul. By Shin Dong-hyun

Being a foreigner in Korea at the turn of the 20th century was difficult enough, with Confucian and Buddhist traditions, fear of colonization by neighboring countries and impending civil war all contributing to rampant xenophobia. To be a Christian missionary here was a nearly impossibly dangerous task. Yet a few still came, believing that heeding the Lord’s call was worth the challenges they faced.

“If I had a thousand lives to give, Korea should have them all,” reads the gravestone of Ruby Rachel Kendrick a missionary who died in 1908 at the age of 24 only eight months after arriving here. The statement came from a letter she wrote to her parents.

Like the biblical grain of wheat, Kendrick died before she could see Koreans latch on to Christianity with the fervor they have today. She is buried at the Yanghwajin Foreign Missionary Cemetery in Hapjeong-dong, northern Seoul.

According to the cemetery’s Web site, some 400 visitors, diplomats and soldiers from 14 different countries are buried there, 143 missionaries among them.

But in the twilight years of the Joseon Dynasty (1392-1910), some foreigners buried here gave their lives not only to spread the word of the Christian God but also to modernize and develop Korea’s infrastructure.

According to Lee Seong-seel, the manager of the cemetery and a pastor at the 100th Anniversary Memorial Church near the cemetery, many of them came to Korea with no personal ties here. “Some of the foreign missionaries didn’t even know about Korea but decided to spread God’s gospel in this land while they were in China or on their way to China,” he says.

The missionaries built schools, orphanages, hospitals, churches and even newspaper companies in what was then known as the “Hermit Kingdom,” cut off from contact with the outside world.

“They suffered persecution and were treated with contempt,” Pastor Lee says.

There’s a story behind every headstone at Yanghwajin Foreign Missionary Cemetery.

John William Heron was the first medical missionary sent to Korea by the U.S. Presbyterian Church, and the first foreign missionary to be buried on the grounds of Yanghwajin.

Below: Jeong Seon created this drawing of Yanghwajin circa 1740. Below right: Jeoldusan Martyrs’ Shrine and Museum, which commemorates a massacre of Catholics in 1866, is next door to the cemetery.

“Heron worked as a medical doctor at the Jejungwon, the first Western hospital in Korea,” Pastor Lee explains. He died at the age of 33 in 1890 in an outbreak of disease that he had been helping to treat. At that time, Korea had poor environmental hygiene and infectious diseases ran rampant.

Heron lived to heal the dying, and his death gave the dead a place to rest, leading to the establishment of the Yanghwajin cemetery. The doctor died in the scorching July heat, making it impossible to move his body to the foreigners’ graveyard in Incheon (burying anyone, Korean or otherwise, inside the capital city was almost always prohibited at that time). Luckily Horace Allen took note of Heron’s case.

“While he was working at Jejungwon, Allen miraculously saved the life of Min Young-ik, a nephew of Queen Min, who was seriously wounded during a coup attempt,” Pastor Lee recounts. “That’s when Allen began gaining trust among high-positioned people.”

The missionary physician used his influence to persuade King Gojong to allow the use of Yanghwajin as a cemetery for foreign people who had helped to modernize and develop the Joseon Kingdom.

Near Heron’s resting place lays the British journalist Ernest Thomas Bethell, who came to Korea in 1904 as a foreign correspondent for the London Daily News to cover the Russo-Japanese War. When Bethell discovered the state of Japanese encroachment on Korean sovereignty, he decided he had to tell the world about it, and publicly criticized Japan in the newspaper he founded, the Daehan Maeil Sinbo.

“He wasn’t afraid to tell the world about Japan’s atrocities in Korea. He was subsequently treated very badly by the Japanese. My heart breaks whenever I introduce people to his grave,” Lee Gyeon-hyo, a volunteer tour guide at the cemetery, said in an interview with the JoongAng Daily in 2008. Bethell’s headstone bears the inscription: “Man of merit for the national independence of the Republic of Korea.”

A large portion of the grounds are set aside for seven members of the Underwood family, who served Korea for four generations, from establishing the precursors of Yonsei University to fighting in the Korean War.

“I’d rather be buried in Korea” is engraved on the headstone of Homer Hulbert, an American missionary who passionately supported Korean independence from Japan. According to the cemetery’s Web site, Hulbert was harassed out of the country by the Japanese colonial authorities after he wrote books and articles, including one in National Geographic magazine, in favor of Korean independence.

Mary Scranton, an American Methodist missionary and a founder of Ewha Girls’ School, the predecessor institution to Ewha Womans University, is another important figure buried at the cemetery, along with Henry Appenzeller, the first Methodist missionary in Korea who founded the Chodong Methodist Church and the Methodist Pai Chai Boys’ High School, which has also since become a university, and Alice Appenzeller, who dedicated her life to women’s education in Korea.

There’s even a Japanese man buried here, named Kaichi Soda, who cared for orphans in Seoul with his wife in the two decades leading up to the Japanese surrender in 1945, then after returning home urged his government and people to make appropriate restitution for their sins during the war.

The area around the cemetery is also steeped in tragic history. In 1866, on a cliff nearby, about 8,000 Catholics including nine French priests were executed by the Joseon government. The martyrs are commemorated at the Jeoldusan Martyrs’ Shrine and Museum, located right next to the missionary cemetery.

The cemetery itself is open Mondays to Saturdays. Visitors can join a guided tour - available in English, Korean, Japanese or Chinese - from 10 a.m. to 3:30 p.m., or visit without a guide between 9:30 a.m. and 5 p.m.