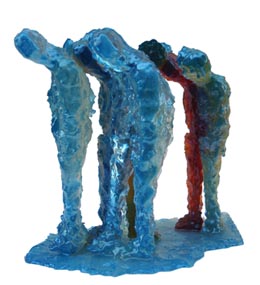 To Jan. 30: “Creuer [Cross].” This exhibit is by the Spanish artist Amador, who specializes in working with synthetic resins and bronze.

Amador was inspired to create the works in this exhibit after taking a trip around the Spanish city of Tunis.

He focuses specifically on the intersections of roads, cultures, people and the city as a whole, and how these coalesce into a web of human activity and emotions.

The artist was also inspired by people from prehistoric times and the artifacts from that period. He found that these ancient times and objects could serve as a bridge connecting the cities of the past to those of the present.

Amador strives to understand why people act and feel the way they do. He uses various media, including sculpture, video, graphics and synthetic resin to fully express himself and his investigation into human nature.

The exhibition will travel to Berlin and Malaga, Spain, after its presentation in Seoul.

To Jan. 31: “Like Water.” Artist Lim June-young’s works often focus on the beauty of water in our everyday lives.

In his exhibition “Like Water,” Lim explores the cold, hard life of metropolises. His favorite muse is New York City - one of the fastest growing cities in the world and what he categorizes as a “megacity.”

Lim’s photos mimic advertisements or postcards of city scenes. However, the absence of people makes the photos seem foreign and out of place. In place of humans, Lim uses sprays of water to reveal the interconnections between people and their urban landscapes.

He says his aim is to show that despite the growing number of apartment buildings and developments, the city is still alive and breathing.

To Mar. 30: “Artists with Arario.” Arario Gallery is showing the works of 18 of its artists in this exhibit. Arario is one of the larger galleries in Korea and strives to become the center not only of Korean contemporary art but also of Korean traditional culture. It is located between Insa-dong and Samcheong-dong, areas which have preserved the traditions of Korean art.

Arario has been hiring artists since 2005. They have signed exclusive contracts with 30 or so artists and work to help new and emerging artists start their careers by providing financial and management support. For example, in 2006 Arario provided their artists with a studio on Jeju Island where they could do their work without the interruptions of everyday life.

This exhibition brings the Arario artists together for the first time. The artists’ work will be displayed in Arario’s two galleries in Seoul and Cheonan.

They will show 20 of their newest pieces, which are characteristic of recent trends in Korean contemporary art.

To Jan. 30: “Actual Imagination.” Andy’s Gallery is celebrating their relocation from Dogok-dong to Cheongdam-dong with an exhibit by artist Kwon Doo-hyoun.

This is the first exhibition of paintings by Kwon, who is widely known in Korea as a photographer. Kwon graduated from the Pratt Institute in New York City and since then he has held over 10 solo exhibitions. Through these exhibitions, he has made a name for himself in the world of photography. Kwon started painting in an attempt to explore his deepest emotions and uncover another aspect of himself.

This exhibition focuses on images of the ocean and sky - subjects art enthusiasts of all ages can enjoy.

Kwon says that for him, these images represent a person’s past experiences, and the difficulty a person has with remembering something fully.

To commemorate the re-opening of Andy’s Gallery, visitors will receive an aroma therapy kit especially designed for each individual after a consultation with a specialist, along with a workshop on art therapy by Dr. Kim Seon-hyeon from Cha Medical Center.