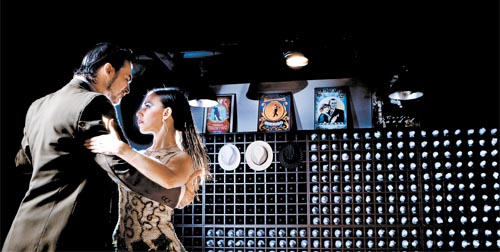 A mother’s cooking may be the best cure for homesickness, but when mom isn’t around, a restaurant serving cuisine from the old country will do.

And today Seoul has more authentic ethnic restaurants, run by entrepreneurs from faraway lands, than ever before.

But these colorful venues aren’t just a place to relieve your ache for a seafood ceviche or Argentinian steak. Some also offer cultural bonuses, like hookah or tango dancing. And of course, they’re a great place for native Koreans to broaden their horizons too.

Charles Dubal, 50, is one of these entrepreneurs. Three months after he opened a Brittany-style crepe restaurant with his friend Yoo Young-jin, he remembered the series of coincidences that led him to Korea.

“If it weren’t Seoul, I might have been making crepes in Kenya,” Dubal joked.

Last summer, he met Yoo, 27, while they were attending the same baking school in Normandy, France, and they ended up opening the restaurant together, Dubal said. He said he had lived in Turkey and Scandinavia before, and thus was prepared for the big move to Seoul.

Dubal cannot speak Korean and he is always frustrated at his inability to explain to his customers how to eat his crepes, which he’s immensely proud of - though not as much as his homeland of Brittany, a region in northwest France. When he meets a customer who can speak French, he always starts a spirited conversation about the region, taking out maps and even showing off a tour guidebook.

Still, despite the language barrier, Dubal said he has learned something about Korean culture. “In Korea, women seem to dominate in decision making over where and what to eat,” he said.

Also in Seodaemun three months ago, Michiko Suzuki, 67, opened Satoshi Curry near Hongik University. Suzuki’s primary goal, she said, is authenticity - she has stuck to her original Osaka-style recipe with no concessions to local tastes, and travels to Japan every three months to buy ingredients. Like most Japanese curry, her concoction is relatively sweet, and she serves Japanese side items like croquettes and shrimp fries.

Another Japanese restaurant in Seodaemun, Daepanok, is run by a Japanese man and his Korean wife near Ewha Womans University. It serves Osaka-style takoyaki, balls of dough with octopus at the center; okonomiyaki savory pancakes, and ramen. The customers are mostly students, and all 10 seats are occupied most of the time.

Christian Meilinger, a 46-year-old Austrian, runs Chef Meili, a homemade sausage and ham shop in Itaewon, with his Korean wife. The first floor is that rarest of Seoul retailers - a deli, where the sausage and ham are made - and the second and third floors are the restaurant.

The clientele here is as diverse as Latin America itself, with the sound of happy Spanish chatter always in the background. There are also many Korean regulars.

The restaurant serves thick Argentinean-style steak with three traditional sauces. According to the owner, even officials from the Argentinean Foreign Ministry, who visited the place last August, have complimented the steak.

A white wall, green window and red sunshade, representing the three colors of the Bulgarian national flag, declare Zelen’s origins, and the restaurant has become a sort of home base for Bulgarian expats, holding welcoming parties whenever a newcomer arrives.

“Bulgarians who come here say the food tastes better than the dishes their mothers cooked,” said the owner, Mihal Ashminov, 28. “I think it’s because it is hard to find Bulgarian food in Korea.”

Kushari, a rice and lentil dish / A potato croquette at Cusco

Khalid Ali, a 42-year-old former employee of the Egyptian Chamber of Commerce in Korea, opened the restaurant with his Korean wife nine years ago.

This Peruvian restaurant is decorated with a large picture of Machu Picchu and a mural depicting Incan myths.

When it opened in 2003, most of the customers were illegal migrant workers from Peru (a situation the owner claimed has been rectified). The Peruvian chef takes special pride in the salty dishes, explaining that in Peru, salt is precious and there is a tradition of serving salty foods to important guests. Ceviche seafood salad with celery, garlic and seafood pickled in lemon sauce is a popular menu item. Peruvians are said to eat ceviche to overcome hangovers but in Korea it’s known better as an appetizer before drinking. It costs 17,000 won per person. Go to Hapjeong Station on line No. 2 or 6, exit 6, and call (02) 334-2093 for more information.

Curry rice with a croquette on top / The Crepe Complete set

The most popular dish here, appropriately, is Satoshi Curry, a simple rice and curry platter that comes recommended by the owner. If it is not filling enough, add a croquette on top.

Satoshi curry costs 6,000 won, and the Satoshi special, which comes with curry, rice and fried shrimp and clams, is 12,000 won.

The restaurant is located on the first floor of the Purgio complex in front of Hongik University’s main gate. Call (02) 322-6824.

Its Crepe Complete is the most common crepe configuration eaten in France, with egg and bacon.

The Crepe Complete sells for 8,500 won. The restaurant is on the second floor of a building in front of an overpass near Yonsei University. Call (02) 312-7774 for directions.

The Japanese owner of Daepanok cooks takoyaki himself while his Korean wife boils ramen. A 3,500 won platter comes with 10 spheres of the classic Kansai street food.