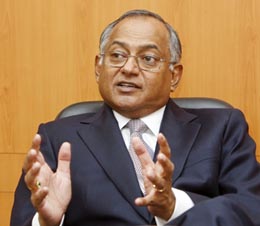 CHENNAI, India - Stressing India’s commitment and drive to develop its economy, Venu Srinivasan, head of the Confederation of Indian Industry, the country’s largest business lobby, said resolving problems with infrastructure and rigid regulations are the key tasks for his country to encourage more foreign investment and spur domestic growth.

Srinivasan, managing director of Sundaram-Clayton Ltd, a leading Indian automotive component manufacturer, and chairman of TVS Motor Company, the country’s third-largest maker of two-wheelers, met with the JoongAng Daily on Jan. 13 at the In-Ko Center here. In his interview, Srinivasan was optimistic about the future of Korea-India economic relations, saying the Comprehensive Economic Partnership Agreement, which took effect on Jan. 1, will lead to new opportunities for Korean firms in India.

Srinivasan said economic relations between the two nations are complementary. While Korea exports parts and goods to India, India works as engineering and outsourcing centers for Korea, he said. “Signing of the agreement signals to companies in Korea that India is open for business,” he said.

While many sectors of the Indian economy are open to foreign investors, service industries, particularly media, banking, health care, law and accounting, are more strictly regulated, according to Srinivasan.

“But many other service sectors are already open, such as the IT and movie industries,” Srinivasan said. “They are 90 percent open, I would say.”

Srinivasan said he sees India’s economy today as a glass that is half full. “It was only a quarter full many years ago, but we have some many good things happening in this country,” he said.

With an open economy to foreign investors, India became a car exporter, Srinivasan said, a significant development for the country. “We are becoming competitive,” he said.

Despite the transformation, issues remain. “The major problem is with infrastructure,” he said, adding that roads are being built and ports developed too slowly.

The businessman also complained that the complex system of laws and regulations hinder not only foreign companies but also Indian firms. “The federal government makes laws, but state governments do not want to implement them,” he said. “And they are rigid laws and regulations, written hundreds of years ago. They are about factory building, land acquisition.”

Srinivasan also noted the irony of India forging a free trade pact with Korea when trade between its individual states is not free. “Different tax systems and multiple layers or rules and regulations that affect operations of factories significantly increase transaction costs,” he said. “We are losing competitiveness inside the factory before reaching customers. We have to tackle problems with regulation and infrastructure.”

Srinivasan also urged Korean companies to be more aware of cultural differences as well as the lack of infrastructure and rigid regulations when they plan to do business here. Pointing out the problems Posco has faced in building a massive steel production facility in the country, Srinivasan advised the Korean company to take the time to engage the public.

The $12 billion Posco plant, announced in 2005, has stalled amid land disputes. Posco, the world’s fourth-largest steelmaker, aims to build the plant in the Indian state of Orissa. With 3,204 million tons of recoverable iron ore reserves, around 30 percent of India’s reserves are in Orissa, the state government said. In the past two years, Orissa has produced 70 million tons of iron ore, compared to 222 million tons of national production.

Posco has encountered difficulties in acquiring land for the plant and iron mines. So far, the company has secured only about 213.3 hectares of land, with 1,253 hectares left.

“I would like to touch upon one issue: land acquisition,” said Srinivasan. “[Mumbai-based carmaker] Tata had a similar problem. Because of a big farmers’ agitation, Tata had to move its car factory from the planned location to the other side of the country, from eastern end to western end. It is a very emotional issue.”

He advised Posco to deal carefully and directly with the residents. “They should intervene with the local community to persuade and convince,” Srinivasan said.

Also noting that Hyundai Motors has greatly impacted India’s economy, Srinivasan said Indian companies have learned valuable lessons from the carmaker. “Hyundai’s drive for new products, the ways they run the factory; it is one of the world’s top companies in the automobile business,” he said.

Hyundai produces about 600,000 cars at their Chennai plant and sold a total of 183,300 cars in India as of 2007. “The quality management, particularly in the supply chain, has greatly represented Hyundai’s presence here,” Srinivasan said, adding that his business also supplies components to Hyundai.

While praising Korea for the wise decision to enter the Indian market at a time when the world’s eyes are on China, Srinivasan said it would be beneficial for the two countries to widen exchanges not only in the economy but also in other sectors.

As the honorary consul general of Korea in Chennai, Srinivasan said his office used to grant visas to Indians to visit Korea until the Korean Embassy opened in New Delhi in 1973. “With the embassy’s support, I was able to have a new vision for the consulate here,” he said. “Indian people knew about Hyundai, Samsung and LG, but they have no knowledge about Korea. They just think it is a country in Asia,” he said. “But it is a country of such a rich tradition, culture and language. My suggestion was making this consulate a Korean center.”

He also said many Koreans came to India without knowledge about the nation and its people, and the In-Ko Center has served both countries to have better and deeper understanding.

The center has succeeded tremendously, Srinivasan said, with English education being provided to Koreans in India as well as Korean language lessons to Indians.

“We have taekwondo and yoga programs,” he said, adding that the In-Ko Center has become the most active cultural center of another nations in Chennai, more popular than those for China, Japan, Britain, Germany, France and the United States.

“This center is privately supported,” he said. “It is operated by Hyundai and TVS funds,” Srinivasan said, adding that the center is also waiting for Samsung grants. “Delhi recognizes that this is a bridge between the Indian and Korean peoples.”

While India has made scarce investment in Korea so far, Srinivasan said more and more Indian companies will seek opportunities in Korea. “It just started, and we are in the very early stage,” he said. “Mostly our investments were in English-language-friendly countries, like America, Britain and maybe Germany.”

He said India’s software industry has entered Korea and is operating actively, and Srinivasan believes that the two nations will have a brighter future when they understand each other better.

“It is basically because there was no cultural exchange for 100 years. India and Korea have not much exchange, but it will start now.”