Full of grit and vigor, a titan rises

Full of grit and vigor, a titan rises

These high-rise buildings sit on an IT campus in Bangalore, known as the Silicon Valley of India. In 2008, the IT sector industry contributed about 7 percent to India’s gross domestic product. By Shin In-seop


BANGALORE, India - Blanketed in blinding sunlight, a woman dressed in a colorful sari slowly ambles along a dusty road, shuffling by a scrawny cow amid a cacophony of honking horns emanating from compact cars and trucks sputtering past.

It’s a common daytime sight in cities and towns across this massive country of 1.15 billion people, but the difference in this particular scene lies in the backdrop.

Across the unevenly paved, pothole-speckled road, the polished glass windows of modern high-rise buildings sparkle in the sunlight, each bearing a grandiose corporate logo. 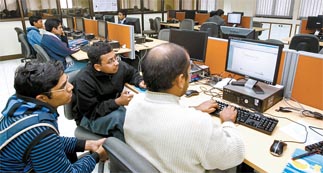 Computer engineering students sit in a lab at Delhi’s Indian Institute of Technology, which has produced more than 170,000 alumni as of 2008 including Infosys founder N.R. Narayana Murthy, Sun Microsystems founder Vinod Khosla and Arun Sarin, ex-CEO of Vodafone. By Shin In-seop

The buildings all have one thing in common: Each is home to an information technology company.

Nicknamed the Silicon Valley of India, Bangalore is the primary engine behind the country’s rapidly growing IT industry, which has become a powerhouse on the international scene.

This bustling city provides a land of opportunities for Korean companies to tap new markets, increase trade and gain new expertise in the high-tech field, as its burgeoning software industry compliments Korea’s developed electronics hardware sector. It’s a marriage the Lee Myung-bak administration is eager to cultivate as it tries to connect the business community with India, which is quickly rising in the ranks to become an economic powerhouse in Asia.

“Korea has world-class manufacturing technology in information communication, while India is rich in software technology and has elite professionals,” Korean Finance Minister Yoon Jeung-hyun said earlier this week during a ceremony to mark the opening of India’s first chamber of commerce in Korea. “Cooperation between the two will serve as a great model going forward.”

Companies from around the world have set up shop in India’s fastest-growing metropolitan city and its vicinities. Signs bearing the names of well-known global IT firms including Yahoo! and Hewlett-Packard as well as India’s major companies like Infosys and Wipro are sprinkled around Bangalore’s numerous industrial parks, which feature cutting-edge laboratories and provide jobs for millions of workers.

One of the largest of these business campuses is Electronics City, more commonly known as ECity, which is home to more than 60,000 employees working at 103 companies. Built in 1978, the industrial park occupies 332 acres of land, according to ECity officials.

International Tech Park, also known as ITPL, is another model high-tech hub in Bangalore. Opened in 1998 as the country’s first modern enclave combining offices, residential areas, shopping districts and entertainment venues, the tech park sprawls out over 69 acres, which is roughly five times the size of Gwanghwamun Plaza. Upwards of 24,000 professionals work at more than 145 companies in a variety of high-tech industries, from bioinformatics and software development to telecommunications.

Some Korean IT professionals view Bangalore as a prime launching point for their careers, as it gives them the skills and background to eventually land prestigious jobs across the world that they might not have otherwise been able to secure.

“Bangalore is an incredible place for an IT engineer’s career,” said Kim Chang-soo, a 33-year-old software developer who joined IT giant Wipro four years ago. “After a couple more years, I will become a senior engineer and the world will open up in front of me with countless opportunities.”

Kim, who previously worked in the IT and computer management division of a construction company in Korea, decided to move to India four years ago, lured by the opportunity to employ and further sharpen his skills and pen new doors.

“In Korea, I was given work that was not related to my specialties,” Kim said. “But here I concentrate on my specialty - software engineering - and am able to further my career. With engineering capabilities, Indian IT professionals are also fluent in English. That makes then competitive in the world market, and that’s what I am going after.”

Wipro, Kim’s employer, is India’s second-largest domestic IT services firm. Employing more than 95,000 workers, the company has 54 development centers across the globe. Kim said his initial salary was about 800,000 won ($704) a month, far lower than what he earned in Korea. But the cost of living here is much cheaper than back home, and Kim considers it an investment. His salary has risen steadily since then, but the big payout is still to come.

“By the time you become a senior engineer with more than seven, eight years of experience, your annual salary skyrockets to about 60 million to 70 million won a year. And thinking about the prices in India, that is a lot of money,” he said. “From then on, you are capable of working at any company anywhere in the world.”

And the opportunities are growing by leaps and bounds.

India’s information technology sector generated about $72 billion in revenue in 2008, growing a whopping 25 percent from the previous year. Although the country’s textile manufacturing and agricultural industries are much larger in both economic impact and employee levels, the IT sector nonetheless ranks as an important driving force of India’s emerging economy, contributing about 7 percent to India’s gross domestic product. It also offers higher paying jobs than many other sectors of the Indian economy.

The IT culture here incorporates a way of life honed by time - one of the main reasons that India excels in this area. The engineering profession in this country has traditionally served as a way to climb up the societal ladder in a nation bound tightly to a caste system, in which those born into the lower rungs of society have little opportunity to rise in the business world. So, many workers see it as an attractive profession.

Indians also have long been accustomed to working alongside people from different backgrounds, cultures and religions, contributed to the intrinsic problem-solving abilities of the country’s engineers.

“If you look at history, each nation has developed some type of specialty and specific skills,” said Huzur Saran, a professor of computer science at the prestigious Indian Institute of Technology in Delhi and the head of the institute’s Amar Nath and Shashi Khosla School of Information Technology. “India has had high civilization for thousands of years. The country is very diverse, and we have a variety of cultures represented here.”

Saran said that India has developed strength in mathematics over the centuries, introducing the concept of zero in ancient times and creating the Hindu-Arabic decimal numeral system, among other accomplishments. That expertise remains to this day.

“In the 1970s and 80s, a lot of India’s engineers went to Western countries, and they picked up computer science,” Saran said. “In the late 1980s and early 90s, those who studied and worked abroad came back to India and taught at good schools and produced good scientists and engineers. Then, the country started developing its economy, using the talent of these workers.

“Enormous talent in India could be used at low cost. Other countries made chips and manufactured cars and electronic appliances, but they did not delve into IT because it was not cost-effective for them,” he said. “On the other hand, the Indian talent pool kept growing. The workers are sophisticated and experienced, leading to the maturity of IT.”

Saran said a lot of students receive strong math training early on because education is so competitive in India. Schools have extra classes after regular hours, and private tutoring and coaching institutes also exist for the cut-throat math examination that will determine whether students can get into prestigious universities.

“After graduating high school, some students that didn’t do as well as they liked on the examination devote the whole next year preparing to retake the exam,” Saran said. “There are a lot of coaching institutes in the city of Kota [511 kilometers from Delhi] that provide preparation for students looking to gain admission into engineering programs.”

Other experts also cited India’s scientific background as a strong reason its IT industry is thriving today. “India has long been strong in math, science, astronomy and engineering,” said P P Mujumdar, professor and chairman of the department of civil engineering at the Indian Institute of Science in Bangalore. “We have a very huge population on which to draw upon for workers, and we are also opening up to the world more and more.”

At the same time, India’s education infrastructure offers crucial support to the IT world.

Mujumdar said his school - which ranks as the premier research institution of higher learning in the country and dates back to 1909 - has focused in particular on producing elite engineers and scientists and provides ample scholarships on that end.

ITT has a similar program in which all graduate students get full scholarships, Saran said. He also noted that the school employs affirmative action policies for those in the lower ranks of the caste system, providing special classes for them to catch up.

“About a half of the school is reserved for them,” he said. “That is a government policy for all state-subsidized universities.”

On an international basis, a high level of English-language proficiency among India’s engineers has helped the country export its IT services to the global market.

“At IIT, we teach all courses in English. In higher education, lots of courses are taught in English,” he said, noting that the use of English is gradually introduced in primary and middle schools and then enhanced in high schools. “I think this is tied to our history, as we were a British colony. For modern institutions of the time, teachers were either British or British-educated Indians. Books were also all in English.”

While India has indeed opened up its IT industry to the rest of the world, its ties to Korea - also a tech powerhouse - are surprisingly weak. In 2008, Korea’s trade with China totaled $186.1 billion, while its trade with India stood at just $15.5 billion.

It’s emblematic of a larger issue, as there are relatively few business, economic, diplomatic and tourism ties between India and Korea.

The governments of both countries, are working to change that. This year marked the start of the Comprehensive Economic Partnership Agreement - a type of free trade pact - between Korea and India, a major development to link the countries from a business perspective. The nations have also launched official campaigns to connect Korea’s hardware industry to India’s software sector. The Knowledge Ministry of Korea and the Department of Information Technology of India will also hold a forum in New Delhi next month with industry officials.

Finance Minister Yoon also believes the two countries will be able to capitalize on the specialties of the other. “Korea has strength in the manufacturing industry, while India is strong in the knowledge and service industries. Wisely taking advantage of the industrial structures will bring about better opportunities for both countries,” Yoon said in Seoul last week during at an event celebrating the launch of the Indian Chamber of Commerce.

At the event, India’s ambassador to Korea, Skand R Tayal, shared that hope. “The Comprehensive Economic Partnership Agreement that took effect on New Year’s Day will start a new era of strong economic cooperation,” Tayal said. “Korea boasts advantages in tech manufacturing, while India has strength in the knowledge and service industries.”