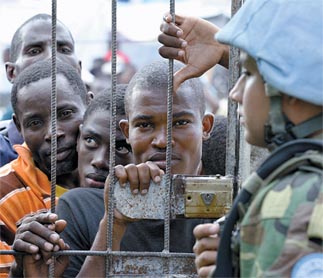 Earthquake survivors in the quake-ravaged Haitian city of Leogane gather at a door for emergency supplies provided by Diakonie, a member of the ACT Alliance, and Caritas International, on Wednesday, under the watch of United Nations troops from Argentina. Hundreds of families in the town are homeless following the January 12 quake. Diakonie organized an air cargo shipment of 34 tons of relief supplies from Europe, along with basic medicines for 80,000 people. [AFP]

The Korean government is considering sending local peacekeepers to earthquake-ravaged Haiti as early as possible due to the island nation’s worsening security situation.

The Foreign Ministry decided on Thursday to send some 200 military engineering and medical personnel to Haiti to help the United Nations Stabilization Mission forces’ peacekeeping operations. It planned to dispatch them in early March.

“Since we told the United Nations that Korean forces want to participate in this Haiti mission at any cost, there will be no problem for us sending troops there. But we are going to dispatch our forces as soon as possible,” said a high-ranking government official on condition of anonymity. “The number of forces should be more than 200 in order to have self-sufficient capabilities.”

Special Forces might also be included in the security mission, the ministry said.

The United Nations has requested its member countries provide 2,500 military troops and 1,500 police officers to Haiti.

Since the United Nations funds those peacekeepers, underdeveloped countries, such as Bangladesh, Jordan and Pakistan, plan to send forces.

In order for Korea to quickly respond, National Assembly approval is necessary.

A joint research and investigation team, composed of officials from the foreign and defense ministries and the Joint Chiefs of Staff, is scheduled to arrive in Haiti next week to survey the situation.

Meanwhile, Korean companies have either begun or plan to start to restore damaged electric power in Port-au-Prince, Haiti’s capital.

The Korea East-West Power Co. sent a six-member team Wednesday to survey the situation. After examining damage to power plants and other electric facilities for a week, full restoration will get under way.

The Korean firm ESD, which is constructing a local power plant, began helping to restore power immediately after the Jan. 12 quake.