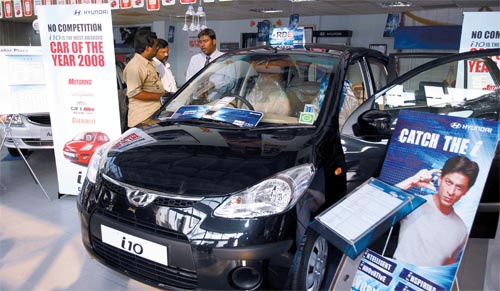 Hyundai Motor Company’s i10, a compact car sold in Mumbai, India, was selected as the 2008 Indian Car of the Year based on its price competitiveness, fuel effiency, and safety. The automobile was launched for Indian consumers in October, 2007. Provided by the company

During the trip the Korean businessmen are expected to request the cooperation of the Indian government in boosting trade between Korea and one of the world’s most attractive consumer markets.

Korean companies have already begun taking advantage of the Comprehensive Economic Partnership Agreement between the two countries, which came into effect on the first day of the year.

Though Korea has yet to break into Korea’s top 10 source countries for imports, it maintains a respectable market share of 2.8 percent between April 2008 and February 2009, according to India’s Ministry of Commerce and Industry, topping rival Japan’s 2.6 percent. 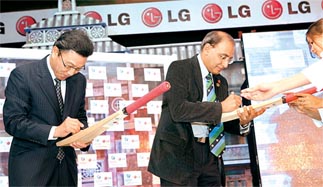 Shin Moon-bum, managing director of LG Electronics India, left, and Haroon Lorgot, chief executive of the International Cricket Council, right, sign their names on each of the cricket bat before exchanging them with each other, in May, last year, in New Delhi, India’s capital. LG signed an agreement with the ICC to officially support the council for 7 years starting last year. Provided by the company

China has the largest share of imports to India at 10.7 percent.

That figure is expected to balloon even higher as Korean companies rush to tap into one of the world’s largest markets, with 1.2 billion potential consumers, in the aftermath of the trade agreement.

At the vanguard of this influx is Korea’s top steelmaker, Posco, which is planning to build a large integrated steel plant in Orissa this year. When complete, the plant for the world’s No. 4 steel manufacturer will have the capacity to produce 12 million tons of steel every year, a full third of the 29.5 million tons of steel that Posco manufactured in 2009.

LG Electronics has also been engaged in aggressive marketing in India, securing a higher share of the Indian market for several electronic appliances including televisions, washing machines and air conditioners.

The company has enjoyed average annual growth of 45 percent since 2005.

LG Electronics’ operation in India was established in 1997, and it now has two plants in the country, one in Greater Noida near Delhi and another in Maharashtra.

And LG Electronics CEO Nam Yong, while visiting the Consumer Electronics Show in Las Vegas earlier this month, said he plans to expand production capacity and investment in India even further.

Daewoo Electronics announced last week that it will be reentering India in May, with a focus on washing machines. The company’s branch office pulled out of India in 2003.

The electronics company said it expects to bring in $4.5 million from washing machine sales before expanding its lineup to refrigerators and microwave ovens.

Hyundai Motor, the leading Korean automaker, will not only benefit from the CEPA but has already moved to solidify its position in the Indian market. The automaker last year set up a research center for IT applications in the automotive industry in Hyderabad.

The Korean company has the second-highest sales of any carmaker in India with 21 percent of its automotive market.

Hyundai Motor started its operation in India in 1999, when the country allowed almost unrestricted foreign investment in its automotive industry. The local Hyundai production plant manufactures 600,000 vehicles annually, concentrating on compact vehicles such as the i10, the i20, the Verna and the Santro.

With the Indian automotive market expected to grow from $34 billion annually today to $145 billion by 2016, Hyundai Motor will be one of the biggest beneficiaries of the CEPA, according to experts.

“Hyundai Motor has a strong following in India, as it has been running two plants in India for the past 10 years,” said Shin Jung-gwan, an analyst at KB Investment Securities. “With the CEPA enacted Hyundai will have an advantage over its competition and may have to expand its capacity to meet growing demand.”