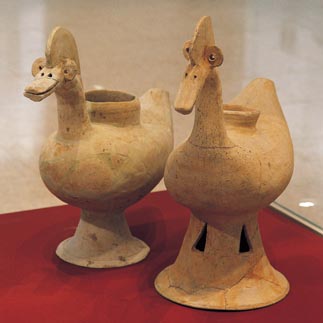 These duck-shaped pieces of pottery were excavated from a tomb in Jungsan Village near Ulsan, a port in the southeastern part of the country.

The pottery pieces are hollow and were used to contain liquid, which could be poured from the spout formed out of the tail section.

Many artifacts unearthed from Korea’s Bronze Age are shaped like birds. A book from the period says that the feathers of large birds should be used for funeral ceremonies because the feathers will help guide the dead up to the sky and into heaven.

Historians assume that ducks like the ones above were used for funeral rituals and were buried with the body in the tomb.