‘Raising expectations’ for art in Seoul

‘Raising expectations’ for art in Seoul 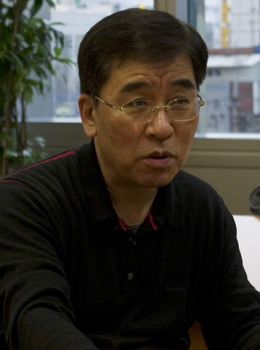 Kim Yee-jun started out in construction - until he was on the team building the Seoul Arts Center in the mid-1980s. When his company was called upon to help build the LG Arts Center in 1996, it was clear Kim had been bitten by the art bug, and ever since he’s been the CEO of that cultural complex.

The LG performance hall, which can seat up to 1,100 audience members, has already hosted performances directed by the world-class modern dance choreographer Pina Bausch, who passed away last year, the South African choral group Ladysmith Black Mambazo and musicals such as “Evita” and “The Phantom of the Opera.”

Since it opened in March 2000, the LG Arts Center will celebrate its 10-year anniversary this year. In that decade, many thousands have been entertained at the site by renowned musicians, actors, directors and dancers from Korea and all over the world. To Kim, it’s all been part of his mission to “change Korea’s theater paradigm.”

Q. On average, the LG Arts Center spends about 10 billion won ($8.7 million) each year, but only takes in about 5 billion won in revenue. Why is that?

A. At the time of the [LG Arts Center’s] opening, it was important that I make a clear distinction to choose between money and art. I chose the latter. So it’s no surprise that we can’t be fully financially independent. The major performance halls around the world usually can’t go over the 50 percent mark in financial independence. If it’s any higher than the intended goal in financial independence, then they should be reprimanded.

Still, isn’t it a concern that you lose more than 5 billion won each year?

During the Middle Ages, a supporter of the arts was usually someone of aristocrat or noble status. Now, that’s been replaced with corporations. I’ve heard from people at LG Electronics that the company’s foreign buyers say after visiting the LG Arts Center that they have renewed faith and confidence in the electronics maker because it supports the arts. Now the importance of corporate social responsibility is strengthening. Losing 5 billion won is not the issue at hand.


Some people call the LG Arts Center the “Galleria,” after the high-end luxury department store, since it seems to focus on bringing in famous foreign artists rather than staging work by local artists.

I can agree to some extent, but the reason we’ve invited so many famous works from abroad is because we wanted to raise the expectations of our visitors. I didn’t want to be influenced by the established artists in Korea. Instead, I focused on scouting out fresh faces, such as the theater director Yang Jeong-woong, the choreographer Hong Seung-yub and other young talents.

If I want it to be considered a high-end performance hall, ticket prices would have to be exorbitant. But typically, tickets to our shows are about 50,000 to 60,000 won. It’s about 20 to 30 percent cheaper than other large-scale performance halls.