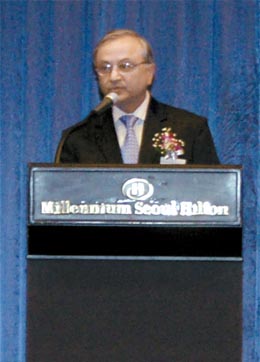 Indian Ambassador to Korea Skand R. Tayal speaks at a science and technology seminar last Monday in Seoul. Provided by the Daedeok Innopolis

Driven by the momentum of the Korea-India summit yesterday and the Comprehensive Economic Partnership Agreement that came into effect at the beginning of the year, Korea and India have moved on to the next phase in their bilateral relationship. In the coming year, the two countries are planning to increase their cooperation in the fields of science and technology, with Korea’s manufacturing sector and India’s knowledge industry as a basis for their collaboration.

Prior to the summit, where a series of memoranda of understanding in the areas of IT, science and space technology were signed, researchers from the two countries discussed the possibilities for expanded cooperation in these areas at the seminar “New Opportunities in Science & Technology Collaboration between India and Republic of Korea.” The seminar, which was organized by the Embassy of India in Korea, the Daedeok Innopolis and Korea’s Ministry of Knowledge Economy, was held last Monday at the Millennium Seoul Hilton.

The Daedeok Innopolis, in Daejeon, is widely known as Korea’s largest IT innovation cluster.

And last month, Korea and India finalized the Program of Cooperation in Science & Technology for the years 2010-2012. Under the plan, the two countries will work together in the areas of renewable energy, chemical and biochemical technology and information technology.

“India places great importance on research in science and technology and the budgetary allocation for science has been raised threefold to Rs. 750,000 million [$16 billion] for a five-year plan,” Indian Ambassador to Korea Skand R. Tayal said at last Monday’s seminar. “Korea’s excellence in converting technologies for commercial use could provide an excellent platform for collaborative cooperation with India, considering India’s known strength in basic and fundamental research,” he added.

A Korean expert concurred with the Indian envoy, saying that increased cooperation between the two countries in the science and technology sector could be mutually supportive and mutually beneficial.

Yim Deok-soon, a research fellow at the Gyeonggi Science and Technology Center, said at the forum, “India has been dominating the world market in the software sector, but it lacks the industrial technologies, where Korea has the competitive advantage. Korea needs skilled engineers, which India has in abundance.”

He continued by expressing his hope for stronger collaboration between the two countries in the coming year.

“To realize this goal, the initiatives from both governments need to be strengthened, and we also need some promotional programs such as technology exhibitions and job fairs and so on,” Yim said. “Many Korean scientists understand the importance of Indian science and technology, but do not have much information for the Indian science and technology system. With such programs driven by the government, both countries can exchange the S&T information and increase the amount of collaborative research they do.”

The sentiment was shared by the Indian envoy.

“People in India are aware of Korean brands such as LG and Samsung, but don’t know much about Korea, the country itself. The same goes for Korean people, because not many Koreans know much about India,” Tayal said. “Therefore, it is necessary to raise our awareness of one another through extensive efforts including exchange and cooperation between scientists, researchers and students from both countries.”

Yim proposed that both countries invest in construction of a research center based in Korea for the projects they plan to carry out together.

“India could establish a research center, such as the Korea-India Cooperation Research Center, within the Daedeok Innopolis,” Yim said.

Plans to build a research center such as the one Yim proposed are already under way, and are being led by the India Study Association working group.