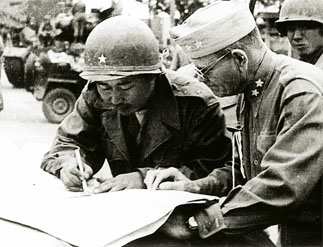 Gen. Paik Sun-yup discusses an operation with U.S. Maj. Gen. Frank W. Milburn, in charge of the I Corps, right after entering Pyongyang on Oct. 19, 1950, when Paik was the commander of the First Division. Provided by Gen. Paik Sun-yup

Marking the 60th anniversary of the Korean War, the JoongAng Ilbo talked to retired Gen. Paik Sun-yup, the country’s first four-star general who made his name in crucial battles and laid the foundation for a South Korean military that was still in its infancy at the outbreak of the war. Decades later, few remember the horrors of the war and its turning points.

The general’s memories of some of these key moments in Korean history will be published in the JoongAng Daily starting today every Monday as part of a special series commemorating the 60th anniversary of the war.

A. To be sure, there were a lot of sacrifices made. But there were other aspects to the war as well. For instance, having or not having the capability to fully utilize what others provide was also very important. The Korean War introduced Western culture, and all its goods came to Korea in the form of everything the United States brought to the country. Korea successfully digested those things, defended democracy and freedom and after the war successfully industrialized and became what it is today. The Korean War was without doubt a sad tragedy in which people of the same race shed blood, but the war acted also as a catalyst that transformed the country, and beneath that change is the blood and sweat of three million soldiers from all over the world, including our very own.

How did the war change the military?

Initially the armed forces started out with 10 divisions, but as the war went on the number increased to 20 divisions, becoming a sizeable force of 600,000. Toward the end of the war military strength had reached 700,000. The Korean military absorbed the U.S. military system, which was the best in the world, from weapons systems to logistics. When Dwight Eisenhower visited the country in December 1952 as the president-elect, I directly briefed him on the situation on the Korean Peninsula. If after the war, the withdrawal of U.S. forces would become necessary, I stressed that Korea needed to strengthen its own military to stand on its own. After that we received full support from the United States. At the time it took on average only two months to form a division.


How was the level of support from the United States?

A total of 16 divisions needed to be placed along the 155-mile truce line, which was tremendous work and required lots of equipment and material, but Korea was simply in no financial shape to cover the bill. The United States did it. Soldiers were fed, while ammunition, fuel and weapons were provided. And it wasn’t only the military aid but the economic aid of $30 million per year that helped us. Glass factories in Incheon, fertilizer factories in Chungju were all established with U.S. investment and technology. All this laid the grounds for Korea’s economic development.


What do you see when you compare the Korean military during the war with today’s?

There is a jaw dropping difference. At the beginning of the formation of the armed forces, the military was equipped with the Japanese Arisaka Type 99 Rifle left by the Japanese [occupation forces]. Starting in 1948, the United States had started to supply some rifles, but these were concentrated on the police force. At the time, the police was the main armed force, and the border guards took on a more supplemental role. Needless to say, there weren’t any airplanes, tanks or even artillery worth speaking of. With the cooperation of U.S. military advisers and with the huge influx of U.S. forces during the Korean War, our military slowly started to take shape. Today our military is one that is well acknowledged around the world.


You have served with some famous U.S. commanders.

Gen. Douglas MacArthur left a very strong impression on me. He was big-minded and came up with the most brilliant strategies, but lost out on small things because he was careless. The misjudgment that China would not enter the war when Allied forces were pushing North and were looking to the possible unification of the Korean Peninsula was crucial. This was because he listened too much to his aides.

But he was a good soldier, passionate about operations, and firmly believed in the values of democracy and freedom.

The others were all heroes who had played a key role in winning World War II. People like Gen. James Van Fleet [1892-1992, Eighth Army commander] were the cream of the U.S. military and showed the Korean military lots of things as they led the war effort. Our military learned a lot by jointly operating, from their thinking process and how they conducted the war.


What were the characteristics of the U.S. military?

In terms of logistics and weapons systems it was and still is the world’s foremost military. Nevertheless, although it fought well during the daytime, at night its combat power dropped. Mobility and air support were outstanding, but its weakness during nighttime warfare made fights with the Chinese military, who specialized in night operations, a tough affair for them.


How about the Chinese military, then?

Ambushing was the trademark of the Chinese military. It fought well. When attacking at night, the Chinese used flutes and gongs, which are very effective against the receiving side because the sounds play with your mind and create confusion. It used various tactics such as siege operations, but logistics were a problem. Once supply lines got longer the military power tended to drop.