Murray, Zheng bring it out into the Open

Murray, Zheng bring it out into the Open 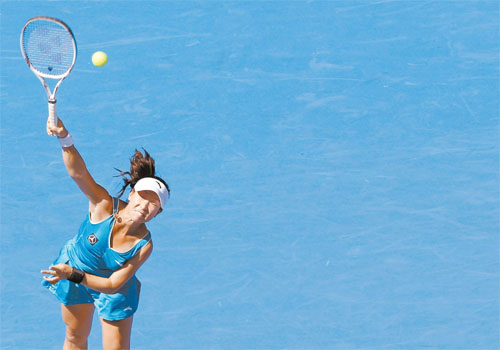 China’s Zheng Jie serves to Alona Bondarenko of Ukraine during their women’s singles fourth round match at the Australian Open yesterday. [AP]

MELBOURNE - Andy Murray and Zheng Jie rewrote the Australian Open history books as they powered into the quarterfinals yesterday.

Scotland’s Murray tamed big-serving John Isner 7-6 (7/4), 6-3, 6-2 to make the last eight for the only time, becoming the first Briton to get that far since John Lloyd in 1985. His reward is a clash with either defending champion and second seed Rafael Nadal or unseeded Croat Ivo Karlovic, who will play later.

Zheng’s achievement was equally impressive, with the unseeded Chinese upsetting Ukrainian 31st seed Alona Bondarenko, 7-6 (7/5), 6-4. It gave her the distinction of becoming the first Chinese player to make the quarters at Melbourne Park, as she and Li Na, who plays her fourth-round match today, continue to popularize the game in their homeland.

The victory sets her up with a crack at either second seed Dinara Safina or fellow Russian Maria Kirilenko.

Murray, the 2008 U.S. Open finalist, showcased his exciting stroke play against the 6-foot-9 American and has yet to drop a set in his four victories at the year’s opening Grand Slam.

“I’ve been moving pretty well and I played some great shots out there, so I haven’t got much to complain about so far,” said the 22-year-old.

“The first set was the key because he was a little bit tired after he won the Auckland tournament last week and he’s had some long matches and he’s winning doubles here as well.”

Zheng, 26, disposed of Bondarenko in one hour, 48 minutes, at the Hisense Arena, proving to be marginally steadier than the Ukrainian in a match where both women struggled to hold their serves.

The stage was set for a tense battle from the opening game when Bondarenko broke Zheng, but that was the first of many in a topsy-turvy opening set. The second set began as the first ended, with Zheng breaking Bondarenko, only to lose her serve immediately.

There was another break of serve each until, at 4-4, Zheng broke Bondarenko to love and then held firm as she served for the match, pumping her fist with delight.

“I think Australia is lucky for me because I won my first Grand Slam doubles title in Australia. So I’m also very happy I’m in the singles quarterfinal,” she said. “I hope both Li Na and I can be in the semifinals.”

Justine Henin hoped to keep her fairy-tale comeback on track when she faced fellow Belgian Yanina Wickmayer later yesterday with both players having plenty to prove. Henin is still finding her feet after an 18-month retirement and admitted after her last round match that she was struggling to recover peak fitness. World No. 16 Wickmayer is in better shape after being forced to go through qualifying after failing to register with organizers in time after a doping ban was suspended.

Third seed Svetlana Kuznetsova is also in action, but had limited preparation after her third-round match ran until nearly 2 a.m. on Saturday. The Russian takes on 19th seed Nadia Petrova, who is on a high after crushing Kim Clijsters in the third round, with the winner playing Henin or Wickmayer for a place in the semis.

Seventh seed Andy Roddick will aim to join Murray in the quarters when he takes on Chilean 11th seed Fernando Gonzalez in an evening match. The prize will be a showdown with U.S. Open champion Juan Martin del Potro or 14th seeded Marin Cilic of Croatia. AFP