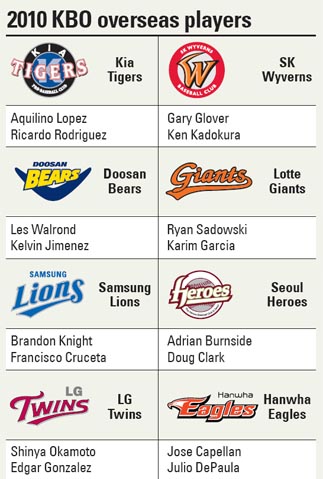 The overseas players for 2010 have been signed, and the majority of the Korea Baseball Organization teams have once again opted for foreign pitchers to bolster their hurling lineups.

With 14 of the 16 overseas players being pitchers, it will be interesting to see if another talent like former Doosan Bears ace Daniel Rios, who won 2007’s Most Valuable Player honor after notching 22 wins, will emerge.

Last season started with six overseas position players, but only three outfielders managed to stick with their teams the whole way through: the Lotte Giants’ Karim Garcia, and the Seoul Heroes’ Doug Clark and Cliff Brumbaugh. Garcia and Clark returned to their respective teams, but the other 14 overseas players in the league this year are all pitchers.

The Kia Tigers gave the trend its push after winning its 10th Korean Series title, its first title in 12 years. Leading the way for the Tigers were their two imports, Aquilino Lopez - back again this season - and Rick Guttormson. The two combined for 27 victories and Lopez played a key role for the Tigers in the Korean Series.

“The length of an average Korean positional player’s career is longer and this has led to a deep roster,” said MBC baseball commentator Huh Gu-yeon. “Signing pitchers from abroad can have more of an immediate impact.”

Following Kia’s game plan, Doosan, LG and Hanhwa have all spent their two allowable spots on their rosters on pitchers.

Among the new signees, nine pitchers are new to Korean baseball and seven of them have experience in Major League Baseball. Adrian Burnside of the Seoul Heroes and Shinya Okamoto of the LG Twins have played in Nippon Professional Baseball.

It’s also worth noting that Burnside and the Doosan Bears’ Les Walrond are the only southpaws in the group.

Players returning for their second season in the KBO are also expected to make an impact this year. Kia’s Lopez, the SK Wyverns’ Gary Glover and Ken Kadokura as well as the Samsung Lions’ Brandon Knight and Francisco Cruceta are entering their sophomore years in the league.

“The Hanwha Eagles, who were last in the league standings in 2009, have lost their star players Kim Tae-kyun and Lee Bum-ho to the NPB. However, with their ace Ryu Hyun-jin and the addition of Jose Capellan and Julio DePaula, the Eagles can reach the postseason,” said Huh.