Shooting for stardom in ‘Chicago’

Shooting for stardom in ‘Chicago’ 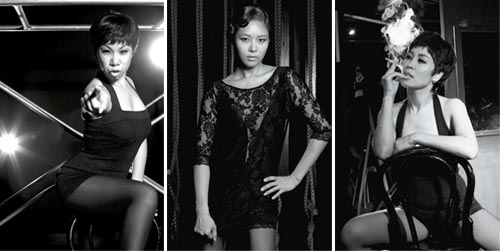 From left, Singer In Soon-i, singer Ock Juhyun and actress Choi Jung-won are the leading ladies in this year’s Korean production of‘Chicago.’Provided by Seensee Company

People may know “Chicago” as a movie from 2002 with Catherine Zeta-Jones and Renee Zellweger, but it has been around for a long time.

The musical, which is itself based on a 1927 play by the same name, was first produced on Broadway in 1975 and has since had a long history of sold-out performances around the world. It first made its way to Korea in 2000.

The musical, which is set in prohibition-era Chicago, is about two aspiring singers, veteran vaudeville girl Velma Kelly and rising star Roxie Hart, who are sent to jail for two separate murders. They compete for the attention of the press to win their freedom and the spotlight.

The latest Korean production of the musical, which opened earlier this month, is drawing attention not only for its now infamous story, but also for its star lineup, which includes acclaimed Korean musical actress Choi Jung-won and two renowned female singers, In Soon-i and Ock Ju-hyun.

Choi and In, who alternate in the role of Velma, and Ock, who plays Roxie, revealed what it’s like to be the leading ladies of Chicago in a recent interview with the JoongAng Daily.

“Velma is the talk of the town until Roxie takes all of her popularity away,” In said. “The character is in eight scenes, taking on a different personality in each one. That was quite difficult for me to do.”

The musical is familiar territory for In and Choi, who both starred in the first Korean production of the musical.

“I played Roxie in 2000, and I am very fortunate to have been able to perform both characters, who are equally attractive in their own way,” Choi said. “And I was very excited when the choreographer told me that I embodied the spirit of Velma.”

In is one of Korea’s most celebrated singers. She made her debut as a member of the Hee Sisters in 1978 and released a total of 19 albums. It is her natural charisma, which has been with her since her days as a Hee Sister, that has helped her make a smooth transition onto the musical stage.

“Many people tell me that the character bears my signature,” the singer-turned-actress said. “If I had been doing musicals for over 20 years like Choi, things may have been different, but I think I do a good job of putting my charm into it.”

She also believes she is the right person for the role.

“Velma is a character that shouldn’t be played by someone that is younger than me,” In said. “She has a certain sophistication in her sexiness that can’t be portrayed at a younger age. I think I can relate to that sexiness.”

The other leading lady in the cast is Ock Ju-hyun, who plays the sassy character of Roxie. A former member of the now disbanded female idol group Fin.K.L, Ock went solo and then landed a part in the Korean production of “Aida” in 2005, which signaled the start of her career as a musical theater actress. She has since performed in works like “Cats” and “42nd Street,” and says that she can’t forget the high she gets when she is performing.

“I have days when I’m down, but when I’m on stage it just gets me excited,” the 30-year-old said. “Especially with such a goofy character like Roxie, I stay perky and playful off and on stage.”

Ock first played the role of Roxie in 2007, and she has participated in subsequent productions of the musical in Korea every year since then. Although her role was previously shared by two actresses, this year she is the only Roxie on the stage.

After the final curtain call for this year’s production of the musical in Korea, the three actresses will go on to perform in projects in their respective fields.

In, who was invited to sing at Carnegie Hall in 1999, will perform there again on Feb. 5, ending her run in Chicago on Jan. 31 to prepare for the concert.

Choi is set to star in the Korean production of “Kiss Me Kate” in July with Nam Kyung-ju, who plays the part of the sleazy lawyer Billy Flynn in Chicago.

Ock is planning to release a solo album in late summer or early fall.