Egypt sinks Cameroon to set up rematch with Algeria

Egypt sinks Cameroon to set up rematch with Algeria 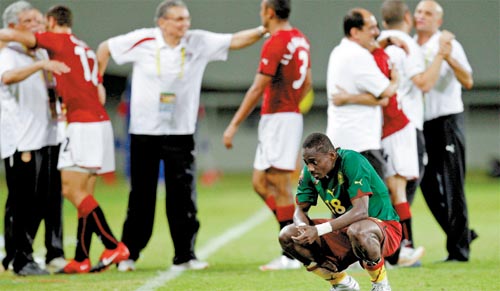 Cameroon’s Enoh Eyong, front and center, looks on after his team lost the quarterfinals of the African Cup of Nations soccer match against Egypt at the Ombaka National Stadium in Benguela, Angola, on Monday. Egypt beat Cameroon 3-1. [AP]


BENGUELA, Angola - Aided by a brace from skipper Ahmed Hassan, Egypt defeated 10-man Cameroon 3-1 after extra time in an Africa Cup of Nations quarterfinal match here on Monday. Egypt’s prize is a mouthwatering last-four showdown tomorrow against bitter rivals Algeria, which pipped the Egyptians to a World Cup ticket in dramatic circumstances in November.

The Pharaohs thus improved to 17 matches its unbeaten run in the tournament and extended its five-year superiority over the Indomitable Lions. Egypt assistant coach Shawki Gharib saluted Cameroon for pushing his team all the way, while defending the performance of South African referee Jerome Damon.

“Cameroon are a great team and they pushed us very hard,” said Gharib. “A match is all about 90 minutes and there are no games without mistakes, but overall the referee was fair to both teams.”

Cameroon skipper Samuel Eto’o disagreed, but added, “I won’t blame the referee because this is Africa and we still have a lot to learn.”

Cameroon, which saw defender Aurelien Chedjou red-carded in the 112th minute for a professional foul on Mohamed ‘Gedo’ Nagy, opened the scoring in the 26th minute with of an own goal by Hassan, winning an African record 170th cap.

Hassan got the slightest touch with his head on an Achille Emana corner at the near post as it sailed in. But he turned from villain to hero in the 37th minute when he caught goalkeeper Carlos Kameni napping with a dipping shot from 35 yards to draw the champions level.

A faulty back pass two minutes into extra time by Geremi Njitap found super sub Nagy, who slotted home between Kameni’s legs to give Egypt the lead. The defending champions increased their lead in the 95th minute when a curling free kick by Hassan was judged to have been palmed beyond the goal line by Kameni.

Nagy dashed through the Cameroon defense in the 110th minute, but Kameni made a brave save. Cameroon fought hard, but Egypt stayed on course for an unprecedented seventh Nations Cup title.