A look back at Lee’s turbulent BOK term

A look back at Lee’s turbulent BOK term 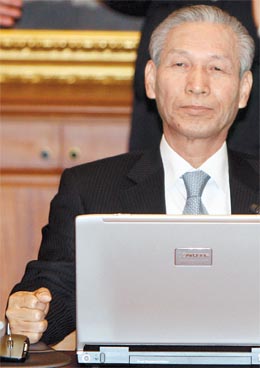 Bank of Korea Governor Lee Seong-tae’s brow was stiff at the latest monetary policy committee meeting earlier this month, as Vice Finance Minister Hur Kyung-wook spoke about “an increasing need to coordinate policies” between the government and the central bank.

It was the first time in over a decade the government had sent an observer to the meeting, though it is allowed under the Bank of Korea Act. At the meeting, the key interest rate was kept unchanged at a record low of 2 percent for the 11th straight month.

“Markets took it as a sign that pressure on the BOK to keep interest rates accommodative was increasing,” Alaistair Chan, associate economist at the Sydney office of Moody’s Economy.com, wrote in a note that day.

As reporters poured questions on Lee about Hur’s participation after the meeting, Lee, still expressionless, simply said, “Decisions in the monetary policy committee meeting are made by the seven committee members. This is an issue that should be digested by the seven members.”

Now, all attention is on whether the central bank will start to increase the rate before the end of March, when Lee’s four-year term expires.

Over the last four years, Lee has tried to strike a balance between keeping the central bank independent from the government and cooperating with it. The remaining two decisions on the key rate before the expiration of his term might show which of the two sides Lee gives heavier weight.

“We still forecast that the central bank will raise the key rate in the first quarter,” said Oh Suk-tae, an economist at SC First Bank.

“It is highly possible that the government will select a figure who will cooperate more actively with it as the new governor. Accordingly, the monetary policy committee could rush a rate hike before the government’s influence increases.”

Oh also said the central bank needs to do so in order to give the market the impression that it is consistent in its policies. “It is a matter of the BOK’s and Governor Lee’s consistency,” he said. “The central bank let the benchmark three-month certificate of deposit rate rise since August to reach nearly 2.9 percent now. That is as good as saying that it will start raising the key rate soon.”

Oh added, “I regret Lee’s remarks in the last six months were not very consistent, bringing about sharp fluctuations in the [bond] market, well, though it could have been caused by the government’s pressures.”

Lee said after September’s monetary policy committee meeting, “The current monetary easing is quite strong.” He also expressed serious concerns about the rises in mortgages and home prices in some regions. In response, market interest rates surged on the expectation that a key rate increase would come before 2010.

The governor said after the October meeting that the BOK would keep a loose monetary policy for the time being, though he still thought the easing was strong. He cited the need to look at the country’s fourth-quarter economic growth and conditions in major economies such as the United States.

After December’s meeting, Lee said that authorities should “move toward the exit step by step to make it out at the proper time,” suggesting that the central bank might begin to increase the rate gradually in the first quarter of this year. In his New Year’s message, Lee said, “For the time being, the central bank will operate its interest rate policy in a way that will help boost the economic recovery.”

“The market reacted to Lee’s remarks word by word too sensitively, with no other significant factors influencing the market,” he said.


Rate hike could be on the horizon

The BOK announced yesterday that Korea’s GDP grew 0.2 percent last year over 2008, becoming one of only three countries with positive growth in the Organization for Economic Cooperation and Development.

Jeon said that the probability that the BOK would raise the rate at a monetary policy committee meeting next month had increased, pointing to Lee’s remark after the Jan. 8 meeting: “An increase of the rate is not the same thing as the end of a loose monetary policy.” The implication was that a gradual increase will keep monetary policy loose compared to past levels.

“Regardless of the possibility, SERI holds the view that it is better for the central bank to begin to raise the rate in the second half of this year, considering the speed of the recovery,” Jeon added.

Chan at the research arm of the credit rating agency of Moody’s Investors Service forecast a rate hike by March.

“Inflation is creeping higher and will continue to do so, driven by rising fuel costs and increased consumer spending,” Chan wrote in a Jan 8 note. “The property market remains buoyant, despite a number of regulatory moves to cool activity ... While we expect a tightening move before mid-2010, this is likely to be a one-off move to head off potential asset bubbles by signaling to speculators the risk of rising borrowing costs, rather than cool economic activity.”

Lee is known for an interest in stabilizing the nation’s real estate market. He said in his inaugural press conference in April 2006, “The real estate market is one of the matters of concern in monetary policy.”

Many rate-setting meetings later, Lee expressed concerns about the surge of household debt, led by mortgage lending, saying after the December meeting, “The problem is not only the property price hikes that mortgages could bring about but also the heavy interest burden.”

Korea’s outstanding household debt, including loans and credit purchases, expanded again in the third quarter to exceed 700 trillion won ($602 billion) for the first time, according to central bank data.

While analysts’ views are mixed about Lee’s remarks regarding an exit strategy in recent months, most analysts have positive views of his actions when the financial crisis broke out in 2008, bringing about serious dollar shortages among local banks.

The BOK slashed the key rate by a total of 3.25 percentage points between October 2008 and February 2009, and made currency swap deals with the U.S. Federal Reserve Board and other major economies’ central banks, reducing concerns about another foreign currency crisis. “The central bank made timely moves in rate policy and cooperated well with the government in the swap deals,” Jeon opined.

There is criticism that its was careless for the BOK to raise the rate from 5 to 5.25 percent in August 2008, one month before the U.S. investment bank Lehman Brothers went bankrupt, triggering the global financial crisis. But Oh of SC First Bank said, “At that time, the conditions - high inflation - led it to do so naturally.” Consumer prices jumped 5.6 percent on-year in August 2008, led by international oil prices. Dubai crude, the benchmark for Asian importers including Korea, peaked at $140.70 per barrel in July 2008.

Most local think tanks, including the state-run Korea Development Institute and SERI, forecast that Dubai crude will be $80 per barrel on average this year, up moderately from last month’s $75.39.

In September, the U.S.-based Global Finance magazine picked Lee as one of the world’s best central bankers over the past year. Lee was one of six central bankers given an A grade among 30 key countries and the European Central Bank. The magazine graded the officials in areas that included inflation control and targets for economic growth.

Still, a majority of analysts believe that despite his acclaimed performance as governor, he is unlikely to be reappointed to another term.

“A figure outside the Bank of Korea who is closer to the government will likely be appointed,” said an economist who refused to be identified.

Among the possible figures is Euh Yoon-dae, now the chairman of the Presidential Council on National Branding and former president of Korea University. He served as a member of the BOK’s monetary policy committee between 1992 and 1995.

Another candidate is Kim Jong-chang, chairman of the Financial Supervisory Service.