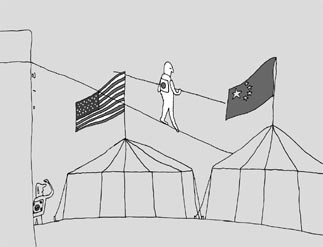 A mom and dad would no doubt be surprised if their nice, obedient daughter started to disobey them. They might call it a rebellious phase if the daughter was a teenager, but if she’s old enough to be married it becomes a problem that cannot be solved through persuasion or punishment. Are the actions of Japan, which is now lashing out against the United States, the immature rebellion of a teenage daughter or the hysterical flailing of an old maid trying to break away from her parents’ arms?

There are no signs of the U.S.-Japan conflict around moving the U.S. armed forces base in Futenma, Okinawa, ending this year, either. The problem instead appears to be growing more complex. The two countries have been trying to move the Futenma air base to another location in Okinawa according to the United States Armed Forces in Japan reorganization plan agreed upon in 2006.

However, the Democratic Party of Japan government, which entered office in a general election in August, has requested revisions to the plan because of a public pledge, leaving the United States perplexed. Japanese Prime Minister Yukio Hatoyama said a solution would be presented by the end of May, but coming up with one has become even more difficult after a mayor who opposed to the move was elected in Okinawa a few days ago.

Japan had been thoroughly obedient to the United States after losing the war in 1945. It was even called a subordinate country by some because of this. Now that Japan is suddenly standing up to the United States, the U.S. must be in shock. Something that would have been unimaginable during the five decades of Liberal Democratic Party rule is now happening.

Meanwhile, Japan continues to send signals to China. The first individual country Prime Minister Hatoyama visited after entering office was China. The secretary general of the ruling DPJ, Ichiro Ozawa, visited China with 143 lawmakers and had an “audience” with Chinese President Hu Jintao.

When Vice President Xi Jinping, the most likely successor to President Hu Jintao, visited Japan, a meeting was arranged with Emperor Akihito, flaunting normal protocol. There is even talk that a historic reconciliation between China and Japan is being considered and reviewed, where Japanese Prime Minister Hatoyama would visit Nanking and apologize for the massacre Japanese forces carried out there in 1937, and Chinese President Hu Jintao would give a speech for peace in Hiroshima.

China is already the largest trade partner of Japan, with trade close to $300 billion per year. There are 635 regular flights per week that connect 22 Chinese cities and 18 Japanese cities, and more than 5 million people travel between the two countries each year.

There are mixed views on the conflict surrounding the Futenma base in the United States. The first is the conservative perspective that the United States cannot make any concessions at all. Professor Victor Cha of Georgetown University warned Prime Minister Hatoyama not to repeat the mistake of former President Roh Moo-hyun, who lashed out at the United States with bravado, saying “Who cares if we go anti-U.S.?”

On the other hand, Professor Joseph Nye of Harvard University takes the position that damaging the 50-year U.S.-Japan alliance because of the Futenma base would be disadvantageous to the United States.

The United States gained supremacy when it won World War II, and raised Europe and Japan with all its heart, as representatives of the Free World. Europe left the shelter of the United States with the end of the Cold War and created its own household called the European Union, which is now playing its part as a responsible member of international society. It still maintains an alliance called the North Atlantic Treaty Organization, but the characteristics of NATO have changed to that of a global alliance.

Meanwhile, Japan may feel frustrated about its situation because it is physically an adult, but is still receiving the care and protection of its parents. Korea has grown up as well as the United States wished, but it is too early to leave the nest because of the North Korean nuclear problem. The attempt made by former President Roh to stand alone was the rebellion of a cheeky adolescent.

Professor John Ikenberry at Princeton University and Professor Charles Kupchan at Georgetown recently wrote in a column in The New York Times that Japan could approach China under the presupposition of maintaining a U.S.-Japan alliance, showing their view that it would be best for China and Japan to play the role of a unified two-horse team pulling the carriage of East Asia. Just as unified Germany, bound by the frame of the EU, was one of the two main powers behind European unification together with France, the writers claim “Chipan” should become the center of the East Asian community. Their view is that this is a good way to introduce and stabilize China as a responsible member of international society, which is in the interest of the United States and East Asia, too.

The best way to counteract the hysterical actions of an adult daughter who has not yet married is to choose an appropriate spouse for her so she can marry and leave, or permit her to live alone. The United States needs to sincerely review how it will let Japan go. The alliance relationship should be maintained in some form, but it is time to permit Japan a “free hand” so it can move more freely as a “normal country.” China and Japan cannot become allies anyway because of differences in identity and values. It is a wiser choice to open the door to a road of independence for an older daughter rather than to keep her in the house and bear her bad-tempered actions.

Leaving the parents’ house does not mean the connection is lost. It is time for the United States to look for a way to change its role from protector to partner.

*The author is an editorial writer and traveling correspondent of the JoongAng Ilbo.