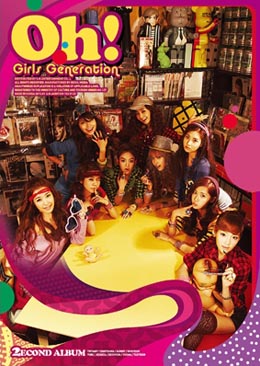 It took just 10 minutes for the album by the nine-member band to rise to the top of the best-seller list on Monkey 3, an online music store.

“The only MP3 file released to the public on Wednesday was the title song ‘Oh!’ and it instantly went to No.1 in an hour,” said an official from Melon, an online music site that offers downloadable MP3 files.

Web sites were being bombarded with orders for the album, the second full-length album by the group, even before it was released.

“We started to receive preorders for ‘Oh!’ at 1:30 p.m. on Jan. 24,” said Kim Ki-jeong, head of the multiproducts division at Yes24.com, a major Korean online retailer. “The album was the best-selling product of the day in 30 minutes.”

Yes24.com declined to say how many preorders it received, but they did report that it is still No. 1 on their pop music chart.

Yesterday, the title track also came in first or second on many Korean Web sites, including Melon, Bugs Music and Cyworld.com. The music is a mixture of electronic pop styles. In the song, the girls’ confess their love for their male friends.

Group members Jessica and Tiffany sing a duet called “Caramel Coffee,” another of the songs among the album’s 12 tracks. And the song “Martian Virus” features Key from boy idol group SHINee.

Some of Korea’s hottest musicians have written songs for the album, including E-Tribe, who composed the music for the group’s hit song “Gee”; Kenzie, who wrote the music and lyrics for “Oh!”; and Yu Young-seok.

Meanwhile, the “Oh!” music video was also released to the public yesterday. In the video, the nine band members appear as cheerleaders and dance.