At the beginning of this year, hard-core Starbucks customers complained at the news that the coffee chain had raised the prices of its specialty beverages by 300 won ($0.26). Though the company is charging less for some basic drinks, that didn’t quiet public grumbling.

Park Da-young, 29, a saleswoman in Seoul, said the price increase made her turn away from Starbucks. “Starbucks is lowering prices for unpopular drinks only. Beverages that Koreans drink the most are all raised,” she said.

Top, King Gojong of Joseon was the first prominent Korean on record to enjoy coffee regularly, and he often did so at a building called Jeonggwanheon, second from top. Above, dabang like this one near Ewha Womans University, photographed in 1986, were popular haunts for java-swilling youth during the 20th century. [JoongAng Ilbo]

But as the Internet buzzes with comments, it provokes the question: Why are Koreans so sensitive about a 300 won increase in coffee prices? Is coffee, not a traditional part of Korean culture, really so significant here?

Daily coffee drinking has only grown popular in the last few decades. Back in the 1970s and ’80s, there were no multinational chains such as Starbucks or The Coffee Bean & Tea Leaf here. Instead, people went to local cafes called dabang.

Dabang were popular spots for young people in those days. “In the old days, only rich people had radios, so most people came to the dabang and requested the DJs there play songs,” said Kim Sang-jin, the owner of a few dabang remaining in Myeong-dong, downtown Seoul.

Most of the coffee served in these dabang was an instant variety heavily flavored with Prima, a powdered dairy creamer and sweetener. 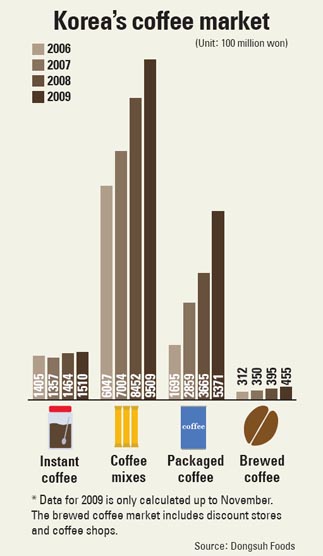 Coffee was first introduced in Korea during the 19th century. Yoo Gil-jun, the first Korean student to study abroad, said in the book “Seoyugyunmun,” which he wrote in 1895 after traveling around America and Europe, “Westerners habitually drink coffee and juice like Koreans drink sungnyung every day,” referring to a traditional Korean beverage served after meals, made from cooked rice.

The Joseon ruler Gojong (1852-1919) seems to have been one of the earliest Korean coffee lovers, according to records that say the king came to enjoy drinking coffee in 1896, while he sought refuge at the Russian Embassy from a cabinet that was friendly to Japan.

According to rumor, the king enjoyed drinking the black coffee served at the embassy because the bitter taste and color reminded him of the Chinese herbal medicine popular at the time.

But Gojong and his son Sunjong’s love of coffee almost cost them their lives, in a famous assassination attempt by Kim Hong-ryuk in 1898.

According to the book “Maecheonyarok,” written between 1864 and 1910 by the scholar Hwang Hyeon, Kim worked as a Russian interpreter for King Gojong, a vital and powerful position linking the king to the foreign government. But the king discovered Kim had embezzled royal funds and ordered him exiled.

Kim plotted to kill the king and prince in revenge at Gojong’s birthday banquet in 1898 by bribing Kim Jong-hwa, a royal cook, to poison the coffee. However, the king spit up his drink after the first sip, and though the prince became ill, he recovered.

Coffee culture spread from the royal family soon to local high officials and literati in the 1920s and ’30s. The bitter brew was an essential part of writers’ meetings at dabang to discuss literature. At this time, coffee was considered a luxury, available only to the rich.

After Korea regained its independence in 1945, a coffee culture proliferated due to American influence - but it didn’t take hold right away. When President Syngman Rhee (1875-1965) served coffee after a press conference, Korean journalists were said to have ladled spoonful after spoonful of sugar into it. 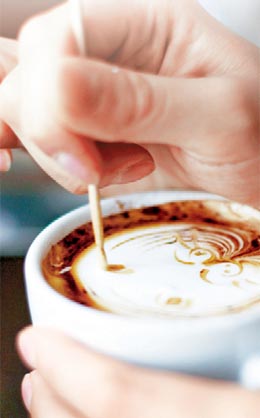 The foreign reporters were shocked, and President Rhee joked to them, “You guys add sugar to coffee, but Koreans tend to add coffee to sugar.”

The step that finally brought the daily cuppa joe into the mainstream came in 1976, with the introduction of “coffee mix” products. These packets contain powdered cream, sugar and instant coffee and are still popular today. The introduction of coffee vending machines in 1978 made it clear the trend was here to stay.

Since Koreans’ introduction to coffee came with the sugary taste of the dabang, instant coffee is particularly favored here. According to Dongsuh Foods, the dominant local coffee manufacturer, instant coffee and “coffee mix” packets account for up to 80 percent of Korea’s total coffee market.

Founded in 1968, Dongsuh claims to be the first company in the world to make individually packaged coffee powder combined with creamer and sweetener. Its best seller is currently “Maxim Mocha Gold Mild,” which sold 5 billion packets in 2007 alone, an average of 13.7 million per day.

“Coffee mix products act as a substitute for the Korean traditional drink sungnyung,” said a spokeswoman for Dongsuh Foods.

“As Korean dishes tend to be salty and spicy, people want to drink something sweet to freshen up their mouths,” she continued. Another reason for the popularity of the packets is that most companies offer areas for workers to make instant coffee themselves.

But today, a growing number of Koreans are choosing black coffee over sweet drinkable confections. According to a survey by Starbucks Coffee Korea and the International Food Therapy Association, 70.8 percent of 1,500 respondents answered that they prefer drinking “Caffe Americano” to other Starbucks drinks. Starbucks Coffee Korea reported it sold about 12 million cups of that basic brew in 2009, followed by around 8.8 million Caffe Lattes. “The shift is partly due to the increasing interest in health among Koreans,” said Lee Ho-seok, a doctor of internal medicine. According to a study in the American Journal of Clinical Nutrition, “coffee contains more antioxidants than typical servings of grape juice, blueberries, raspberries and oranges.” But, Dr. Lee said, that only refers to brewed coffees.

“Many patients come to me and ask if it’s really healthy to drink coffee every day, and I tell them over and over again that regular consumption of brewed coffee is beneficial only to some people,” Lee said.

Despite the trend, the market share of instant coffee including coffee mixes has only fallen from 85 percent in the 1990s to 80 percent today. Experts say that most people buy a cup of coffee at cafes when they are out, but when they come home, they still drink instant coffee mixes.

Oh Ri-na, a 28-year-old office worker, said that she always carries three-in-one coffee packets every day. “I drink at least three cups of coffee daily, and imagine buying that at Starbucks. It’d be way too expensive,” she said.

So rather than a revolution, Korea’s coffee culture has tweaked itself to allow one cup of brewed coffee from a luxurious cafe and countless cups of the instant stuff.