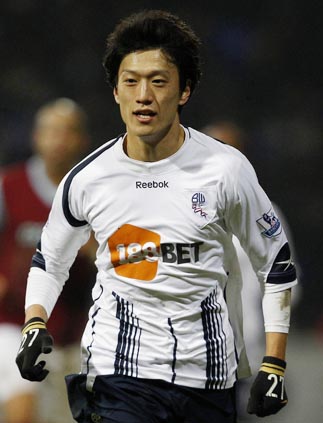 The Bolton Wanderers’ Lee Chung-yong runs for the ball during an English Premier League football match against Burnley at the Reebok stadium in Bolton, England, yesterday. [REUTERS]

Lee Chung-yong added another goal to an already impressive rookie season in the English Premier League in the Bolton Wanderers’ 1-0 win over Burnley F.C. at Reebok Stadium in Bolton, England, early yesterday.

The win was all the more meaningful for Coyle, considering it came against his former team. Coyle left Burnley merely three weeks ago and the two sides faced off with a spot in the relegation zone on the line. Lee scored the game’s lone goal in the 35th minute by taking a pass from Kevin Davies and striking a left-footed shot from the center of the penalty area that clipped the crossbar and cleared the goal line.

While Lee’s knack for scoring is notable, the 21-year-old midfielder has made himself an integral part of Bolton’s offense. According to a report by ESPN, Lee attempted a total of 35 passes out of his team’s total of 218 passes in the Burnley match. The total was the highest among the Bolton players. Sky Sports awarded Lee a score of eight for his effort, which ties him with Davies for the highest total among Bolton players.

“It was a fantastic goal,” Coyle said in an interview with the JoongAng Ilbo. “He’s an excellent player. He has a good set of skills and knows how to enjoy the game of football. I know he will continue to develop into an even better player.”

“Kevin Davies provided me with a superb pass,” said the gleeful Lee while explaining his fifth goal during a post-match interview.

“We got an order from Coyle to make good use of the field when attacking. We noticed our opponents were tending to stick to the middle of the field, so we channeled our attacks from the wing positions.”

“We ended up tying many of the games we should have won. I was a little surprised with the result since this was the first time we did not allow a goal this season and protected the lead in the second half,” said Lee.

Lee’s recent performance is also encouraging news for national team manager Huh Jung-moo, who has been stressing the importance of finding a player with the ability to deliver goals in key situations.

The current list of prospective forwards for the World Cup roster has failed to produce goals on a regular basis. Park Chu-young of AS Monaco and Lee are the only two players who have displayed offensive flares in the recent past.

“Lee’s goal was a good example of how a forward or a winger should react in goal-scoring opportunities. Today’s goal was possible because he passed the ball and continued to keep himself busy and put himself in a position to receive a pass,” said Huh.

“It also looks like Lee has adjusted well to playing against taller and physically stronger European players.”

Bolton will travel to Liverpool for its next match on Jan. 31, and will host Fulham on Feb. 7.