Herbst brings it home with a victory in World Cup

Herbst brings it home with a victory in World Cup 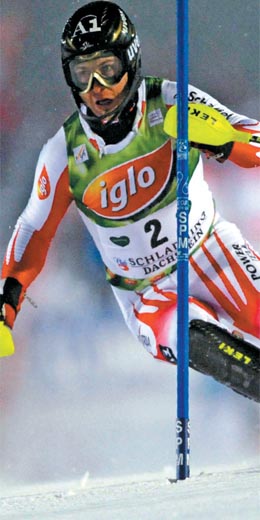 Under floodlights and a piste lined by tens of thousands of flare- and flag-waving spectators, Herbst produced a storming second leg to secure the win from Switzerland’s Silvan Zurbriggen with fellow Austrian Manfred Pranger, the leader after the first leg, in third. Herbst timed 1 minute 45.91 seconds over the two legs, 0.56 seconds ahead of Zurbriggen with Pranger at 0.82 seconds.

Pranger went into the second leg with an enormous lead of 0.59 seconds, but that had been cut to 0.28 seconds by the second intermediary time. He faded badly in the final third in extremely icy conditions, with temperatures at minus 3 degrees Celsius (26.6 degrees Fahrenheit). Another Austrian, Benjamin Raich, was in fourth at 0.91 seconds, enough to consolidate his place atop the overall World Cup standings after 25 events.

The early running among the top 30 finishers from the first leg who got to race in the second was set by Japan’s Naoki Yusaka, who finished eighth at 2.28 seconds, one place ahead of teammate Akira Sasaki. Buoying Japan’s slalom hopes for the upcoming Winter Olympics was Kentaro Minagawa, who finished 21st to complete a fine evening for the Asian nation in one of the bastions of alpine skiing.