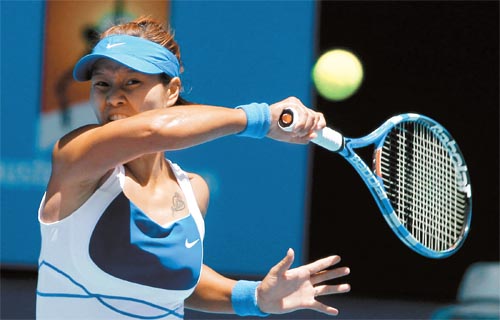 China’s Li Na returns a shot against Venus Williams of the United States during their quarterfinal match at the Australian Open yesterday. [REUTERS]

MELBOURNE - China’s Li Na created a massive boil-over when she came from a set down to beat Venus Williams 2-6, 7-6 (7/4), 7-5 in an error-strewn match to reach the Australian Open semi-finals yesterday.

Li will now face either defending champion Serena Williams or Belarusian seventh seed Victoria Azarenka for a place in the final after seeing off the sixth-seeded Williams in two hours and 45 minutes at Rod Laver Arena.

“It’s the best day of my whole life,” an exuberant Li, who joins countrywoman Zheng Jie in the final four, said immediately afterwards.

However, neither Serena nor Azarenka would be overly concerned after watching Li and Venus make 110 unforced errors between them in a poor-quality match. Li, the 16th seed, started nervously and seemed overwhelmed by the occasion as she wilted badly in the first set against the American’s power. She was broken in her first two service games and although she managed to get one back, Williams broke once more at 5-2 to take the first set in only 30 minutes.

The start of the second set followed a similar pattern as Li was broken in the first game and Williams appeared to be cruising to victory. But at 2-4 down Li suddenly became more relaxed and began to play with far greater freedom, her serve picking up and her ground strokes finding their range.

Williams tightened up as her forehand went to pieces and she was broken twice, the second time when serving for the match at 5-4. The Chinese player pounced in the tiebreaker to level the match as a nervous Williams came up with a host of unforced errors. The American got back on track as she held her serve to start the third set and then broke Li, but that triggered a run of six service breaks in a row as neither player was able to assert her dominance.

At 3-4 down Li held off one break point to at last hold to get the set back on serve. Williams cracked, losing her serve and giving Li her chance to serve for the match. But she wasn’t able to do it as Williams broke to love, then promptly lost her own serve to love to give Li a second chance. Li made no mistakes this time, although she blew two match points before finally clinching a famous victory.