North Korea fired a barrage of coastal artillery shells yesterday into areas where the North declared two “no-sail” zones a day earlier in the waters north of the Northern Limit Line (NLL) in the Yellow Sea near Baengnyeong Island on the west coast of the peninsula.

The no-sail zones include waters in both Koreas. It was the first time the reclusive nation had included South Korean waters in a no-sail zone.

Soon after the North fired at 9:05 a.m., South Korean marines on the island fired bullets as warning shots in the air toward the North instead of counterattacking.

The North’s artillery shells landed in the North’s own waters, said Won Tae-jae, spokesman for the South’s Defense Ministry. Won also said that the North fired some 30 shells in two rounds from 9:05 until 10:16 a.m.

The first round lasted for 20 minutes and was directed toward the upper no-sail zone and the second round began around 9:45 a.m. and aimed toward the other zone. 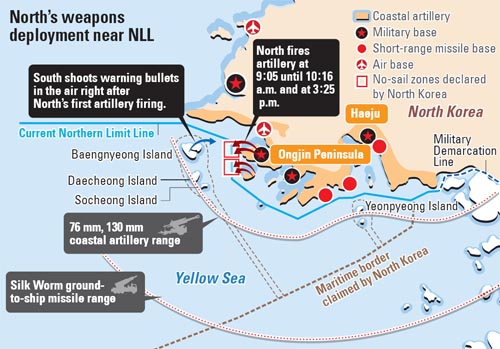 “Until now there was not a single case that the North fired near the NLL,” said South Korean Navy Commodore Lee Ki-shik who is in charge of intelligence operations at the Joint Chiefs of Staff. “Right after the South spotted unidentified objects flying toward the NLL on our radar, we fired back as a warning signal. Since we were not sure where the object would land, we immediately fired for self-defense.”

The NLL is the de facto maritime border between North and South Koreas. The North has challenged the border in the past and the latest inter-Korean naval skirmish in one of the no-sail areas took place two months ago.

“We acted upon rules of engagement,” Lee said. “If the North fires into our territory, we counterattack. If not, we don’t.”

As of yesterday, the ministry still cannot confirm the exact location from which the North’s shells were fired.

At 9:35 a.m., the JCS issued a warning three times to the North, saying, “Artillery shells you have fired have fallen near the South’s Baengnyeong Island. Do not create unnecessary tensions and stop firing at once. If you don’t halt firing, we will take countermeasures.” The JCS organized a separate crisis management team to deal with the situation five minutes after the North first fired.

No damage was reported following the North’s action, Lee said.

The ministry sent a separate statement to the North at 1:27 p.m. under the name of South Korean Army Maj. Gen. Ryu Jae-seung, representative of inter-Korean general-level military talks.

The statement read that the North’s designation of no-sail zones in the waters south of the NLL in the Yellow Sea is a major provocation that violates the cease-fire agreement (that ended fighting in the Korean War [1950-53]) and the inter-Korean non-aggression agreement. It also urged the North to cancel the action at once and warned that the North would be held fully responsible for any consequences caused by its actions.

The North fired its third round of several artillery shells two hours later. The North’s General Staff of the Korean People’s Army said through the state-run Korean Central News Agency that it would keep on doing firing exercises on the Yellow Sea.

“The Korean People’s Army carried out its annual artillery firing trainings in the waters on the west coast of the peninsula in the morning,” KCNA quoted the General Staff as saying. “No one has the right to bother our planned military exercises on our sea territory.”

The announcement added that there is only one maritime border limit the North recognizes in the Yellow Sea. The North’s General Staff did not comment on the South’s warning shots.

The JCS again sent the same warning communication message that was issued in the morning twice to the North at 3:35 p.m.

South Korean President Lee Myung-bak, who is visiting India, ordered Presidential Chief of Staff Chung Chung-kil to organize an emergency meeting and monitor the situation after receiving reports from Kim Sung-hwan, the senior presidential secretary for foreign affairs, who is accompanying the president, only a few minutes after the shooting began.

The meeting lasted for one hour and included the South’s defense and unification ministers, Kim Tae-young and Hyun In-taek, respectively. Instead of Won Sei-hoon, the chief of the South’s National Intelligence Service, the NIS’s second deputy director Park Sung-do participated in the meeting.

“The working-level talks related to pending issues associated with the Kaesong Industrial Complex between two Koreas slated for next Monday will go ahead as scheduled,” said Hyun in a separate meeting with reporters following a seminar that was held at the Korea Press Center in central Seoul.

“The South Korean government will make it a priority to secure stability on the peninsula. We will have inter-Korean talks as scheduled to maintain our consistent principles and desires,” he added.

He went on to say that the North must halt escalating unnecessary tension between the two Koreas and stressed that the North should be more trustworthy in its actions.

On Monday, two areas near the South’s Baengnyeong Island were designated as no-sail zones from Monday until March 29, a possible indication that Pyongyang is attempting to challenge the NLL using new tactics.

The North did not announce the no-sail zones via either the International Maritime Agency or maritime communication channels, but through a Russian wire service agency.

Last Friday, the North asked to hold a round of working-level military talks to discuss issues of communication, the passage of people and customs clearance.

The date of such talks has yet to be finalized.

The two Koreas technically remain at war because a cease-fire, not a peace treaty, halted fighting in the Korean War.