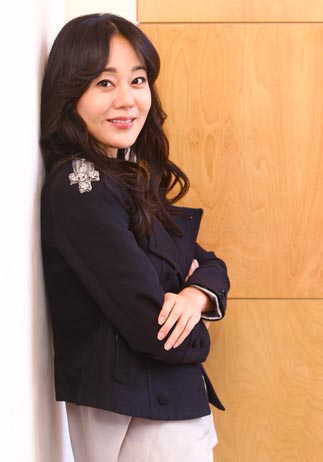 “Lost” star Kim Yun-jin is back in Korea with a new film about a woman who is jailed for killing her abusive husband. [JoongAng Ilbo]

When people make mention of actress Kim Yun-jin, the adjectives attractive, intelligent and charismatic often pop up in the text.

Kim, who is known outside of Korea as Sun Kwon on the U.S. television drama “Lost,” has built her career around characters who also possess these qualities.

Now, Kim is hoping to add a new dimension to her image with a new role in the Korean film “Harmony,” which was released yesterday.

In the film she plays Jeong-hye, who is given a 10-year prison term for killing her abusive husband. Shortly after she is put in jail, Jeong-hye gives birth to a child. Eighteen months after that she will have to give up her child for adoption, in accordance with Korean law. In the meantime, Jeong-hye organizes a choir to deal with the hardships she is facing and through it she is offered the possibility of earning a special one-day leave to see her son.

“Even before I had heard the entire story, I knew what kind of movie it would be,” she said in an interview with the JoongAng Ilbo. “And I knew it would make audiences cry.”

Since the film has many obviously emotional scenes, such as the one where Jeong-hye and her son are forced to part, Kim was a little hesitant about whether she wanted to sign on.

But she found that she was drawn to the character, and she and director Kang Dae-kyu spent a lot of time discussing how the character would develop.

Kim had another reason for taking the role: she needed a change. She last appeared in the Korean cinema three years ago as a tough lawyer in the film “Seven Days” (2007). She rose to fame here as a spy in “Shiri” (1999).

“I wondered what it would be like to be part of a film with so many female characters,” she said. “I also wanted a role that would really be different from those I’ve played in the past. But Jeong-hye became a character who is positive as well as strong. I think I’m naturally attracted to strong female characters.”

In addition to giving her a different kind of role to play, the film also gave Kim the opportunity to work with 69-year-old veteran actress Na Mun-hee.

“One day while we were filming, I saw Na was sitting alone on a bench. She didn’t cry and didn’t say a word, but her body was telling me that she was full of sadness,” she said. “Until I met Na, I hadn’t ever communicated so deeply with an acting partner. Just making eye contact with her, my eyes were full of tears.

“Na helped me to immerse myself in the character of Jeong-hye 100 percent. When I was doing Shiri 10 years ago, Choi Min-sik told me that I only shine when my partner shines. As I worked with Na, I began to realize what he meant.” Choi is a Korean actor who is well known for his role in the hit film “Oldboy.”

After the Harmony premiere, Kim will go back to the United States to film the next, and last, season of Lost. After the show wraps in May, Kim plans to keep right on working.

“I will keep auditioning. I may not find a role for days or months, but I’m ready for that. Now that I’ve started a career in Hollywood, I will keep working until the day when I win an Academy Award. I feel free to dream, because the dream is mine.”