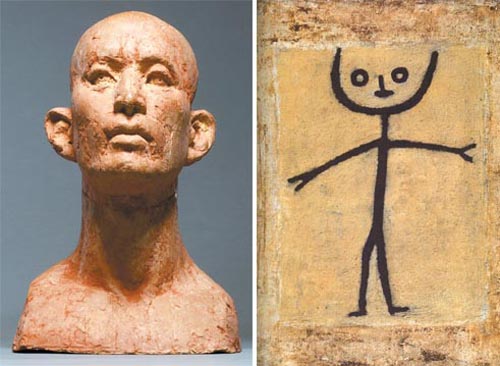 A few Korean modern artists are never left out of local elementary and middle school fine arts textbooks. Two of these are sculptor Kwon Jin-kyu (1922-1973) and painter Chang Uc-chin (1917-1990).

Coincidentally, retrospective exhibitions on both are now underway, so whether you’re a Korean ready to reminisce about your early education or a foreigner curious about Korean modern art, there will be something to catch your eye.

Though the artists shared space in art texts, the venues for their respective exhibitions are different in the extreme. Kwon’s is being held in an old-fashioned Western-style stone building constructed in the early 1900s in Deoksu Palace in central Seoul - now a branch of the National Museum of Contemporary Art. 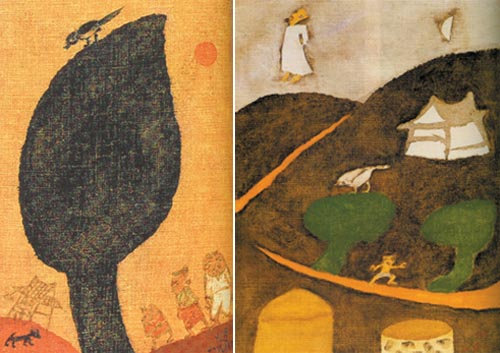 Meanwhile, the exhibit on Chang takes place at the Museum of Art, Seoul National University, which opened in 2006 in a new building on the campus of the state-run university in southwestern Seoul.

The atmospheres of the two artists’ work also contrast. The heads in Kwon’s sculptures, many of which are busts made of terra-cotta, stare into empty space in solemn, enigmatic solitude. On the other hand, Chang’s paintings, many done in oils with childlike simplicity, are peaceful and even occasionally humorous.

They do have some things in common: Both created art based on their daily lives while at the same time exhibited a deep spiritual sense, especially related to Buddhism.

Most of Kwon’s works were modeled after acquaintances, and the titles are simply the models’ names. According to the MOCA, Kwon repeatedly said, “To reflect the inner world of a model [in the sculpture], I cannot use a model whom I don’t know personally.”

Though based in reality, Kwon’s work is not entirely realistic, as the faces of the busts are longer and narrower than real ones and lack shoulders, giving them a strong psychological rather than material aspect. Also among these works are Kwon’s “self-portrait” sculptures, in which he sometimes depicts himself as a Buddhist monk in contemplation.

Most of Kwon’s works are terra-cotta because of its long-lasting nature. The artist said, “Even stones and bronze decay, but terra-cotta, which was used for burial accessories in the ancient times, doesn’t decay easily.”

Perhaps Kwon’s sculptures of human figures look more solitary because he is known as an “artist of misfortune.”

He ended his life in suicide in his studio, leaving a note that read only: “Life is vanity, ruin.” According to MOCA, the day he killed himself he had gone to Korea University, to view an exhibition that included a sculpture he had created of himself. 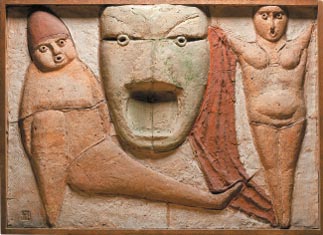 The exact reason for the suicide is not known, but it is said that he was always suffering from the idea that he was not fulfilling his dreams.

Yet Kwon was not entirely humorless. Unlike his lonely human busts, Kwon’s animal sculptures can be whimsical and even cheerful. 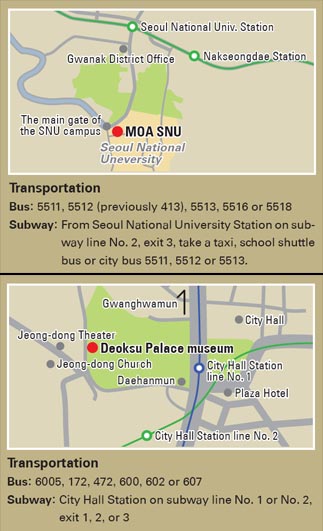 The retrospective on Kwon, which features about 100 sculptures and 40 drawings, was made possible through joint research and planning by Korea’s MOCA, the National Museum of Modern Art, Tokyo, and the Musashino Art University Museum & Library on the campus where Kwon studied.

The exhibition already ran at those two Japanese institutions late last year before coming to Korea, where it will be open through Feb. 28.

Where Kwon favored tragic human figures, Chang’s work is full of common objects such as trees, children, magpies, houses and the sun and moon, appearing in extremely simplified forms. They might look like children’s paintings at first, but they are reportedly meant to be a visualization of the simple wisdom of those who have reached enlightenment in Zen Buddhism.

According to the Chang Ucchin Foundation operated by the artist’s family, Chang frequently visited Buddhist temples in the 1970s to contemplate Palsangdo, the portrayal of the eight phases of Buddha’s life. He finally received his Buddhist name, Bi Gong, which means “non-void,” from Zen Master Kyong Bong.

The foundation reported that Chang often said, “I am simple.”

He once explained this mantra. “I am simple: a frequent utterance of mine. But I now confess it with some urgency. I’ve stubbornly demanded a clean life.”

The exhibition introduces Chang’s world in five stages: early work (1938-50), his conversion to abstract art (1951-64), his experimentation combining Western and Korean traditions (1965-79), his period painting scenes of deep solitude (1980-85) and the years when the influence of Zen and Korean folk paintings asserted itself (1986-90).

One of his last works before his death, “The Night and an Old Man” (1990), shows the artist in a white gown floating in the sky with the moon, leaving the world and all the things he frequently painted - mountains, trees, a house, a magpie and a child - behind. Is it Nirvana he reached?

The exhibition is being held to commemorate the 20th year since Chang’s death, and it includes 80 oil paintings and 140 ink paintings made from 1939 to 1990. It will run though Feb. 7.