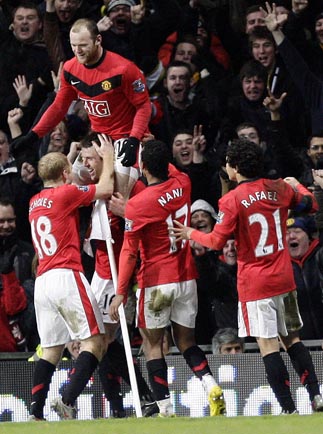 Manchester United’s Michael Carrick, second from left at bottom, reacts after scoring a goal with fellow team members during their English League Cup second leg football match against Manchester City at Old Trafford Stadium in Manchester, England, on Wednesday. Wayne Rooney added a goal in injury-time to help Manchester United win over Manchester City, 3-1, in the semifinals. With the win, the Reds advance to the Carling Cup finals against Aston Villa at Wembley Stadium on Feb. 28. [AP]