A personal approach to medical care, with cats

A personal approach to medical care, with cats 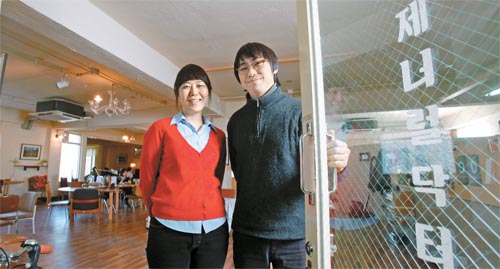 Jeong Hye-jin, left, and Kim Seung-beom, right want to restore the relationship between doctors and patients at General Doctor, which is a combination of a clinic and a cafe (bottom)


A sleek white cat jumps between the wooden desk and cream-colored couch that are hiding behind the white brick wall in a cozy room in Hongdae. Atop the wall is a dark-colored cat, sitting as though she is the keeper of the gate. Sunshine lights every nook and cranny, and a yellow rubber duck, two plush animals and other toys lie scattered around a low bed covered in ivory-colored linens.

Next to the cats, a man and a woman are busy brushing the cat hair from their jeans and sweaters with a roller.

The smell of freshly brewed coffee wafts through the air from the open air kitchen sitting beyond the brick wall. Facing the kitchen is another open space populated with wooden tables, chairs, bookshelves, small toys and old computers.

Welcome to General Doctor, which just might be the strangest doctor’s office in Korea. There are no doctors in white coats, no hospital smell and no hard-to-understand medical jargon. Instead, the doctors draw pictures to help explain medical conditions and make cheesecake and coffee for their patients. The doctors also give up their cushy and authoritative leather armchairs and sit in hard metal folding chairs, giving their patients the luxury of reclining on a big, soft couch.

This marriage of doctor’s office and cafe is a strange combination indeed, but for Kim Seung-beom, 34, who characterizes himself an outcast, it was a natural course to follow after he graduated from medical school. Rather than go though a medical residency at a hospital, he came up with the idea of creating a place where patients could gather, have coffee or a meal and receive medical treatment, all at the same time.

“I think that Korea might have the worst doctor-patient relationship in the world. There is just not enough communication between the two groups,” said Kim, who is soft-spoken yet has a firm belief in what he is doing. “This lack of communication often results in cases of medical malpractice or unnecessary surgeries. For that reason, patients are always ready to be angry with their doctors.”

In Korea, patients get the “one minute treatment,” in which patients wait for an hour or more and see their doctor for only a minute, even if they have questions.

Kim opened General Doctor, a family medicine practice, in May 2007 in an attempt to restore the relationship between doctors and patients. The clinic operates on an appointment-only basis and the doctors see patients for at least 30 minutes.

“Even if a patient drops by because he or she has a touch of the flu, 30 minutes are not enough to get to know them,” said Jeong Hye-jin, 33, who joined Kim two years ago, after she gave up a promising medical residency. “We try to analyze each patient’s daily routine, because that is usually where the source of most illnesses is found.”

In addition to jotting down a patient’s symptoms, Kim and Jeong also keep a record of things such as a patient’s favorite beverage. 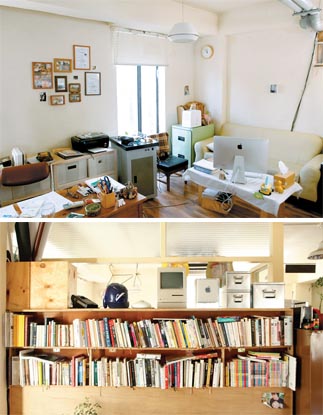 In the doctor’s office, one wall is decorated with books.

In the first year, people visited General Doctor out of curiosity. Later, it was time - a 30-minute visit with a doctor was a rarity. Now, people from other neighborhoods such as Mok-dong, western Seoul, and Gwanghwamun, central Seoul, go there for the doctors’ reputation as good listeners who care about their patients.

“I remember I had one appointment with a person who was about to take a civil service exam,” Jeong recalled. “She was under a lot of stress and just needed someone to talk to. As soon as she sat down, she burst into tears.”

Kim and Jeong want General Doctor to become a sarangbang (meeting space), where anyone socialize, even if they are not sick.

“I believe the role of doctors will change in the near future. Modern medicine has succeeded in prolonging our lives, but it does not care about the quality of our lives,” Jeong said.

On a recent visit to General Doctor, Jeong had six appointments for the day.

The note on General Doctor’s front door reads: “We have cats here.” By Jeong Chi-ho

Because the doctors devote so much time to each patient, the clinic does not make enough on its own to stay afloat. In addition to Kim and Jeong, there are two other staff members who are in charge of the kitchen. The cafe helps keep the business going, but also helps in blurring the line between the doctors and their patients.

“It’s not easy to run a cafe here [in Hongdae] and survive, but luckily our coffee is selling well,” Kim said.

Kim and Jeong have between 500 and 600 friends at me2DAY, a local social networking and microblogging site. There, they share their everyday moments with patients, who sometimes send messages asking for medical advice.

“Since we exchange the details of our daily lives with one another, I was able to help a patient who asked me via me2DAY whether I could disinfect a wound on his head,” Jeong said. “I knew he had tripped and fell the day before and I was well aware of how big his wound was. If I hadn’t been communicating with him on a regular basis, I wouldn’t have been able to help him because I wouldn’t have known anything about his condition.”

Kim has also developed a number of interactive devices that have helped to put his patients at ease and improve the doctor-patient relationship. One of these is a tongue depressor with candy on the tip of the depressor for children.

Kim and Jeong’s parents are perhaps the only people who are not happy about this new development. They think their children should not have given up their easy lives as doctors just to serve coffee and make food.

“[My giving up my residency] was the biggest disappointment for my parents,” Jeong said. But she says she has no regrets.

“Before I met him, I thought Kim was this rich guy with a cafe who was working as a doctor for fun,” Jeong said. 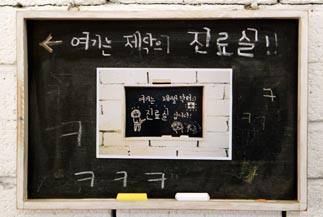 The phrase on the blackboard reads “This way to Jedak’s’ office.” Jedak is an abbreviation of General Doctor in Korean. By Jeong Chi-ho

She soon discovered that the opposite was true. The two sat down one day for a long conversation and she found out that Kim had grown up in a working class family. The conversation changed her life. She walked away from the hospital life and hasn’t looked back since.

“I slept 10 hours a week when I was a resident, and it’s almost the same for other residents. It’s impossible for doctors to learn how to communicate deeply with their patients under such circumstances,” Jeong said. “When I first met Kim, he was worn out. He did all the work, treating patients, making the coffee and the food. But in that extremely tired face I also saw a ray of hope and happiness. It gave me courage to team up with him.”

General Doctor has about 10 projects planned for the coming year. One of them involves inviting a veteran family doctor to join them.

“He was the first to implement the family doctor system in the ’70s,” Jeong said. “If he joins us, I think we can cultivate a culture of family medicine, which has failed to take root here.”

When asked about their vision for General Doctor, Kim said, “As you can see, all the desks and chairs are intentionally humble,” Kim said. “Like these old chairs and tables, I want this place to be friendly and easy to access.”

Both doctors speak English. Hours are 2 p.m. to 10 p.m. on weekdays. The office is closed weekends. It is located near the playground in Hongdae. Go to Hongik University Station, line No. 2, exit 5. For more, visit www.generaldoctor.co.kr or call (02) 322-5961.