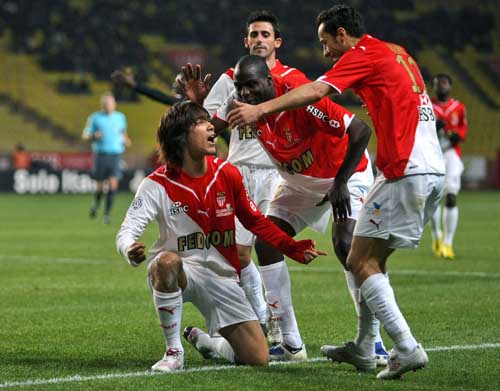 Monaco’s Park Chu-young, left, reacts with teammate Nene, right, of Brazil after scoring the first goal against Nice during their French League 1 soccer match on Saturday.[AP]

A two-goal effort by Park Chu-young helped AS Monaco defeat Nice, 3-2, at the Stade Louis II in Monaco, early yesterday.

With the win, AS Monaco kept alive its seven-game unbeaten streak, and the two goals were Park’s eighth and ninth of his sophomore season in the French Ligue 1.

Park opened the scoring in the 19th minute by knocking in a header on a corner kick from Brazilian forward Nene. Although Nice had several quality opportunities in the first half, it failed to connect on the chances.

Nice pulled even in the 54th minute with a goal from Chaouki Ben Saada of Tunisia. The tie didn’t last long, as Park once again put his team ahead by scoring his second goal of the match in the 59th minute Then Nene scored a goal of his own in the 62nd minute to put AS Monaco up by two goals.

Didier Digard was able to pull Nice within one goal by scoring off a free kick in the 80th minute, but Nice came up short and its 14-year unbeaten streak against AS Monaco came to an end.

Park has now scored in two consecutive games. The 25-year-old’s last goal came in the French Cup win against Olympique Lyon when Park headed in the winning goal. Park’s previous goal in a league match was in the Dec. 24 match against Le Mans.

Excluding the goal in the France Cup tourney, Park now has eight goals in league matches this season.

Since scoring five goals and adding five assists in his rookie season last year, Park has set an impressive pace this season with eight goals and three assists with little more than half a season on the books. His latest match should elevate him to a top 10 scorers list wherein his teammate Nene leads the league with 13 goals.

Park has developed into an important part of the AS Monaco’s attack because of his ability to play the role of a goal-scorer as well as the supporting forward for his partner Nene. AS Monaco announced on Saturday that it has signed Park to a contract extension that will see him stay on with the team for an additional three seasons through 2013.

“He knows what he wants,” assistant manager Jean Petit was quoted as saying to AFP.

“He wants to play for a big club. So he lives healthily and gives everything for the team. And, true to the Asian mentality, he never gives up on anything.”

AS Monaco has now won four consecutive matches and, at five wins and two ties, has not lost a game in its past seven. With the win, AS Monaco improved to 12 wins, three ties and seven losses to improve to fourth in the Ligue 1 standings.

Meanwhile, Lee Chung-yong started in his 11th consecutive match - including two cup matches - as Bolton Wanderers’ right winger in a league match against Liverpool at Anfield Stadium in Liverpool.

Lee played an active role on Bolton’s offense and came close to scoring his sixth goal of the season in the 23rd minute of the match.

Lee took control of the ball near the half line and dribbled into the penalty area, passing defender Martin Skrtel and goalkeeper Pepe Reina to release a shot into an empty net, only to have Sotirios Kyrgiakos redirect the shot with his left foot at the last minute.

Bolton went on to lose the match 2-0 and dropped to five wins, six draws and 11 losses.

The team is currently in 16th place.