[Battle of Unsan] The Chinese at the Jeogyu Mountain Range

[Battle of Unsan] The Chinese at the Jeogyu Mountain Range 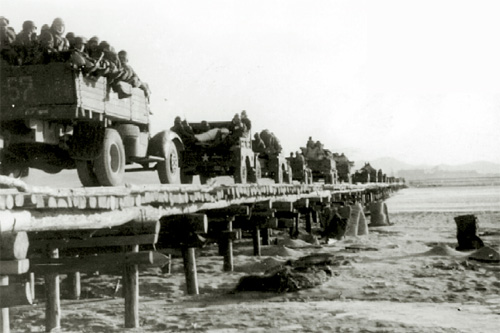 The ROK 1st Division crosses a wooden bridge at the Cheongcheong River in October of 1950 as it heads toward the Supung Dam at the Amnok River after reclaiming Pyongyang. Shortly after, the 1st Division met the first wave of attacks by Chinese communist forces that had secretly entered the Korean Peninsula. Provided by General Paik Sun-yup.


In October of 1950, it was just too quiet as the ROK 1st Division entered Unsan, North Pyongan Province.

The roads were deserted. There wasn’t even one car in sight. The customary refugee columns that had littered the roads since the outbreak of the Korean War were nowhere to be seen. As the commander of the 1st Division deployed at the front line, I couldn’t get rid of the uneasiness I felt creeping up my spine.

The 1st Division was heading northwards after defeating the North Korean military at the Nakdong River. Passing through Pyongyang on the 21st of that month, the division’s headquarters was established at Yongbyon Agriculture School south of Unsan.

I ordered the 11th, 12th and 15th regiments toward Unsan. This was a region known for its tough geography. My orders were to progress to the Supung Dam after passing through Unsan. At the time, the conventional military wisdom held that the unification of the Korean Peninsula was a thing of the not-too-distant future, while the Americans racing toward the Amnok River were thinking that they’d be home by Christmas.

But all of a sudden, all traces of humanity had vanished on the roads from Yongbyon to Unsan.

“Why is it so quiet?” I felt a very peculiar anxiety. When my unit crossed the Guryong River and headed north, I met two old villagers.

I got an answer I didn’t expect: “Many Chinese have come.”

I couldn’t believe what I’d heard. The two old-timers must have seen something. Did it mean that the Chinese military had already crossed the Amnok River and entered Korea? If that was true, what would happen to unification of the Korean Peninsula - and the war?

There was no immediate evidence of Chinese military intervention. But inside my head I started to make mental preparations if it turned out to be true. The Chinese military had a decade of experience fighting the Japanese. While fighting Chiang Kai-shek’s Kuomintang Army in a civil war, it had experienced countless large-scale battles. As the Kuomintang Army was defeated and ran to Taiwan leaving all its equipment, it had access to U.S. military weapons as well.

On top of all this, Douglas MacArthur, the UN commander, visited Pyongyang and I was notified that President Syngman Rhee was also planning to visit Pyongyang. As the commander of the 1st Division - the very first unit that had entered Pyongyang - it was hard to ignore these kind of visits.

On the 24th, the 15th Regiment on the right side facing Unsan captured a Chinese communist soldier and sent him to divisional headquarters for interrogation. The previous night a mysterious enemy had conducted a night attack, and the regiment had repelled the attack and moved forward, capturing the straggler. 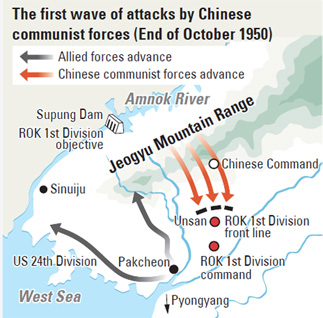 I interrogated the soldier with the Chinese language skills I had honed during my days at the Mukden Military Academy of Manchukuo.

Where are you from?

“From Kwangtung, the south of China.”

“The 39th Army,” part of the conventional Chinese military.

Are you a Korean resident of China?

The prisoner answered my questions relatively easily. Originally, he was part of Chiang Kai-shek’s Kuomintang forces, but when he became a prisoner of the communist military he’d been integrated into it. I confirmed through him that Chinese units stationed in the South of China had already entered the Korean Peninsula and were hiding in the tens of thousands in the nearby mountains.

This was shocking. The Chinese had crossed the Amnok River in mid-October and already it had made winter preparations, judging from the soldier’s quilted winter uniform, earmuffs and rubber sneakers. The quilted uniform was khaki-colored on the outside but white on the inside, so if reversed it could be used easily as a camouflage jacket. This was very different from the South Korean and American military, which were still in their summer uniforms.

I sensed the intervention of the Chinese military. The situation was dire. To the North of Unsan was the Jeogyu Mountain Range. It turned out later that the Chinese command post under Peng Dehuai was established only 20 kilometers (12.4 miles) north of our regiment’s position. The Chinese communist forces were hiding in several places, taking cover under the rugged terrain of the Jeogyu mountain range. Thus, the American aerial reconnaissance was useless. The Chinese had cut trees and branches, spreading them on their backs to hide their movements. During the daytime they didn’t move at all, avoiding detection completely from American reconnaissance planes.

We were facing a new enemy. The North Korean military led by Kim Il Sung had virtually disappeared after the South Korea’s push northward. But now taking the place of the North Koreans, the Chinese military had invaded this country.

The South Korean Army and the allied forces that had defeated the North Koreans at the bridgehead of the Nakdong River and were racing north had hit a formidable obstacle - the Chinese communist military - and had to retreat only one step away from unifying the Korean Peninsula.

At the outset of the Korean War, the Chinese numbered 300,000. Toward the end, there was a presence of 1.5 million. We had to fight the Chinese countless times and in denying them victory, we paid with tens of thousands of lives.

The Korean War, a tragedy that pitted one race against itself, was entering a new phase, and a very cold wind was blowing from the North in the form of the Chinese communist military. A totally new warfare that we had not seen before unfolded at Unsan. It was now an international war in East Asia.

It was also the beginning of carnage.