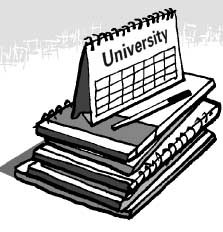 Is there is a Joseon road to learning? If by learning you mean succeeding on an exam, there most definitely is.

The person who is said to have studied the hardest in the entire 500-year-long history of the Joseon Dynasty (1392-1910) was Kim Deuk-sin, a 17th century poet. A recent best-selling self-help book that claims you need a fanatic devotion to achieve your goals was inspired by Kim. According to the book, Kim read a book on Confucian teachings, “Baegijeon,” 113,000 times, and other major works on Confucianism tens of thousands of times each. It seems Kim followed the old saying that to truly understand something you must read it over one hundred times.

However, Jeong Yak-yong, an 18th century scholar whose pen name was Dasan, did not agree with Kim’s manner of learning. Dasan noted that even if a scholar read a book one hundred times a day for three years straight, he would have read it only slightly over 100,000 times total. He believed, therefore, that it could not have been possible for a scholar like Kim to have read so many books over ten thousand times each. Dasan was well respected for teaching his followers the best way to study for their state examinations, and helping them pass. He told them to start with studying classics, then to learn the Chinese style diplomatic documents and then to study questionnaires asked in state examinations.

It is said that Dasan advised his students to avoid rough roads or paths covered with trees, and to take easy paths when possible. He believed that studying was so difficult that students should be clever about how they study and use shortcuts.

“Master of Study,” a TV drama on KBS-2, is the talk of the town in education circles nowadays. The drama begins with Kang Seok-ho - a lawyer, not a teacher - declaring that he will train five poor students for the college entrance exam so that they can enroll in a prestigious university the next year. There are critics who worry that the drama will fan existing social biases about education and further incite private education fever. But Kang’s can-do attitude appeals to many parents who are tired of being told there is only one way to pass the college exam.

Even if the heroes and heroines of the drama succeed in entering a prestigious university, it does not mean that their future success is guaranteed. And education should be as much about character development as it is about getting good grades.

But it is strange to hear people criticize a drama that tries to help hopeless students to study hard and enter a good university, with a claim that “it preaches the logic of the privileged class.” What should actually be changed, is the never-ending exam cycle where the graduates of prestigious universities are forced to study again to enter a law school or a medical school.