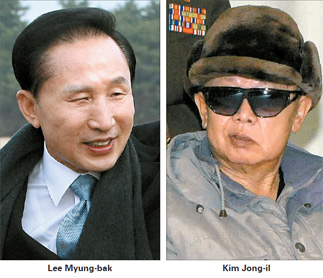 Speculation about whether the two Koreas will hold a summit this year is percolating after South Korean President Lee Myung-bak’s comment during an interview earlier last week with BBC.

Some observers say that Lee’s latest remarks regarding inter-Korean talks strongly hint that the two sides might be arranging a third summit, while spokespeople for the Blue House have been playing down such theories.

In an interview with BBC during his visit to the World Economic Forum in Davos, Switzerland last week, Lee said, “I can’t say for sure it [the summit] will be held soon but I think I can meet [Kim Jong-il] within this year,” according to an audio file unofficially released by BBC to the Korean Broadcasting System. However, when his interview remarks were written down for an official press release from the Blue House, the quote had been slightly watered-down by Kim Eun-hye, spokeswoman for the Blue House, to read, “There is no reason for me not to meet him even within this year.”

As controversy surrounding this remark grew, Kim apologized to the president. She also apologized to Blue House journalists and said that the press release was tweaked because “the President was extremely tired during the [BBC] interview” and that due to his condition, the interview didn’t go as smoothly as expected. She said she was extra cautious because his remarks could have large ramifications.

The Blue House said her apology was accepted and that when the situation regarding Kim’s press release was explained to the president, he smiled.

Korean media have reported that in October last year in Singapore South Korea’s Labor Minister Yim Tae-hee met with Kim Yang-gon, director of North Korea’s Workers Party’s Unification Front Department for a confidential meeting in which possibilities of summit talks were discussed. No progress was reported.

At Seoul’s suggestion, the two previous rounds of inter-Korean talks were both held in Pyongyang in 2000 and 2007. South Korean Presidents Kim Dae-jung and Roh Moo-hyun met with Kim Jong-il during those years, respectively. The summits focused mostly on economic cooperation between the two Koreas. Nuclear issues however, were not discussed.

As speculation concerning a new summit grows, the Blue House asserted that Lee’s comments during the BBC interview were merely a repeated confirmation of his stance regarding summit talks.

“The main point of the president’s comment was that if authentic talks addressing the future of Korea could be arranged, he would be willing to meet [Kim] anytime, even this year,” said Lee Dong-kwan, the senior secretary for public affairs at the Blue House. He added that there are no preparations underway for a summit.

Meanwhile, in an interview with CNN on Saturday, President Lee said that the South has presented the North with a “grand bargain” and that the time has come for North Korea to make a decision on whether or not to drop its nuclear program. The proposal, aimed at ending Pyongyang’s nuclear program in return for the South’s giving the North economic aid and helping it normalize ties with the international community, was announced last September by President Lee after consultations with the U.S., China, Russia and Japan.

During the CNN interview, Lee said that it is possible that discussions regarding the “grand bargain” might not be able to take place right away due to the internal situation in the North. However, he said eventually the two Koreas will be able to discuss the proposal.