Myths from a lost tomb

Myths from a lost tomb 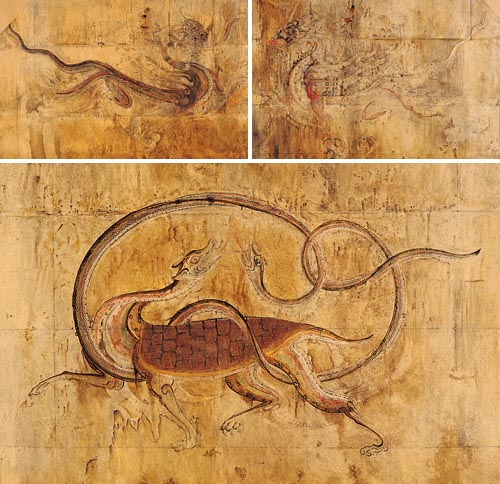 This painting is a replica of a mural underneath a tomb in North Korea considered one of the most significant yet excavated. The life-sized mural, dating back to the Gogureyo Period (37 B.C.-A.D. 668), was found in Sammyo-ri, Nampo, a city in South Pyongan province in North Korea. The four ancient animal gods representing the four compass directions - a blue dragon, a serpentine tortoise, a white tiger and a crimson bird, are depicted with a realistic and dynamic touch.

This replica was produced by two Japanese academics, Oba Tsunekichi and Ota Fukuzo of Tokyo Fine Arts University, in 1912, during the Japanese colonial period. They reproduced even the damaged part of the mural, making it a useful reference for future restoration projects.

*The photos and texts for Treasure Trove are provided by the National Museum of Korea. For more information, call (02) 2077-9000 or visit www.museum.go.kr.