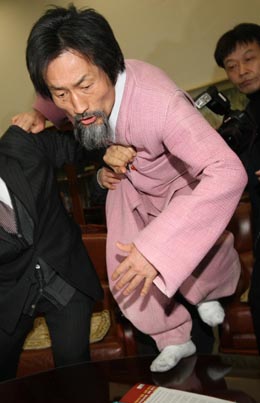 Lawmaker Kang Ki-kap jumps on the table in the office of the National Assembly secretary general on Jan. 5, 2009 during a protest. [YONHAP]

You might wonder what the Society for Research on Our Law is all about. The Grand National Party defines it as “the Hana Group within the court.” The Hana Group was an elite insider group within the military. Former President Chun Doo Hwan headed the group when he was in the army, and the Hana Group became the country’s power base during the Fifth Republic.

The Society for Research on Our Law thinks the comparison is ridiculous. They argue that they should not be compared to a private organization that abused its power during a military regime.

The former members of the Hana Group are not happy with the parallel either.

Former lawmaker Heo Hwa-pyeong was a key player in the early Fifth Republic. He argues, “The Hana Group began from a very pure motive. We were different from the Society for Research on Our Law, which seeks to spread leftist ideology within the judiciary. We began with the intention to make the army more powerful and to eradicate corruption within the military.”

The comparison is due to the controversy over trials and rulings that allegedly reflect leftist inclinations.

I am confused by the trend shown in the dismissal of the assault case against a Democratic Labor Party executive, the release of confidential records on the Yongsan incident and the acquittals of lawmaker Kang Ki-kap and of the producer of the television program “PD Notebook.” Some of the judges are members of the Society for Research on Our Law while others are not.

The core of the accusations is that the society creates and spreads an atmosphere that makes such rulings possible. Justice Oh Jae-seong of the Seongnam District Court, who is the head of the society, insists that such controversy and suspicion are unreasonable.

The society claims to be an academic group. However, its identity is increasingly vague.

Justice Moon Hyung-bae of the Busan District Court, who is a former head, recently wrote: “We have a Supreme Court Chief Justice [Lee Yong-hoon] whom most of our members support .?.?. Now that the chief justice is in the mainstream, we must not repeat previous mistakes.”

Now it sounds more like a secret society. They deserve our mistrust for being exclusive and taking sides.

Writer Lee Mun-yeol asks, “How can a group that produces and spreads leftist theories be a purely academic gathering?”

The society was born under the banner of judicial reform.

The second judicial crisis of June 1988 marked the beginning. That crisis began with the petition drive that prevented Chief Justice Kim Yong-chul from remaining in office through the Roh Tae-woo administration.

The masterminds of the drive were the founding members of the society. Attorney Kim Jong-hun, who was the first secretary to Chief Justice Lee Yong-hoon, is one of them. He recalls, “The signature collecting drive provided an opportunity for the democratic activists within the judicial system to speak up. As the members of the 13th class of the Judicial Research and Training Institute took office, the so-called activists became a part of the judicial system.”

The society took a great leap during the Roh Moo-hyun administration. During that time, the “386-generation” aides paid attention to the judiciary branch’s capacity to change society.

They were obsessed with the idea that they could change the world with a court ruling.

In October 2004, the capital relocation plan was ruled unconstitutional. The 386-generation presidential aides were furious. The Roh Moo-hyun administration attempted to reform the judiciary system and the Constitutional Court. And Park Si-hwan was appointed as a justice on the Supreme Court.

The agenda that Justice Park is now pursuing could hardly be called academic. He is the founding president and the marquee name of the society. He wrote in a collection published by the society that changing the court to suit its ideals was the goal.

Last May, the Society for Research on Our Law was suspected to be behind the crisis over Justice Shin Young-chul. At the time, Justice Park was condemned for having encouraged group action among young judges.

When you act as a group, you are bound to be trapped in group ideology, factionalism and exclusive egocentrism even if you began with innocent intentions. High officials’ conduct has not been free from such characteristics.

A judge must cultivate an image of solitude and balance. These virtues build up a reputation for justice and authority.

Now, these values have been greatly damaged. When citizens face a trial today, they check to see if the assigned judge is a member of the Society for Research on Our Law. This issue is related to the trust of the judicial branch as a whole.

He needs to speak on the true nature of the Society for Research on Our Law and his position regarding the dissolution of the group.

The time has come for Chief Justice Lee to break his silence.

*The writer is the executive editor of the JoongAng Ilbo.