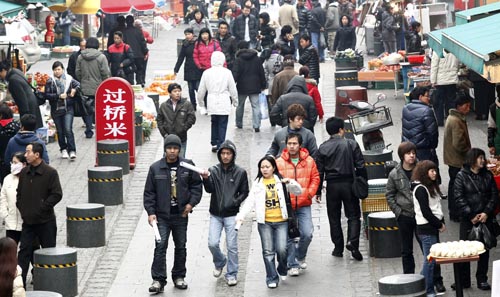 Ansan has about 34,000 foreign residents, making up 4.5 percent of its population. The city government’s active measures to cope with a growing foreign population have been widely held up as an example for other regions. By Jeon Min-kyu

“I came here to get help with reporting the change of workplace while looking for a new job,” said 30-year-old Nishshanka Wijerathne.

According to Hwang Yu-jin, director of Migrants’ Helpcall, who is also in charge of Sri Lankan translation services, this is a vital issue. “The change of workplace issue is critical for foreign workers because if a person fails to report it to the authorities after he or she quits a job at one place and gets another, that person can become an illegal alien.”

It’s just one of the services provided by this agency on the second floor of the Ansan Migrant Community Service Center in Wongok-dong, Danwon District, in the Seoul suburb of Ansan, Gyeonggi.

“I quit my previous job at an automobile parts company in Ulsan after I got hurt in the back during work,” said Wijerathne, who said he came to Korea about two years ago to earn money to support his family in Sri Lanka.

Explaining Wijerathne’s case, Hwang said, “He initially applied for an industrial compensation with the authorities, which was not accepted. It happens a lot with foreign workers. When a worker reports a backache, it is considered more as an individual disease rather than an industrial accident.” Hwang said he has seen similar cases many times before.

In the two years since it opened in March 2008, the Ansan Migrant Community Service Center, which includes Migrants’ Helpcall, has worked to integrate itself into the local foreign community, offering help and information for immigrants, whether newly arrived or experiencing difficulty.

It’s one of many institutions to help expatriates, including the Seoul Global Center, but what sets the Ansan Migrant Community Service Center apart is the diversity of the services offered, from language interpretation and help with cultural differences to legal advice and even health care.

But why is such an important facility located on the outskirts of the capital? 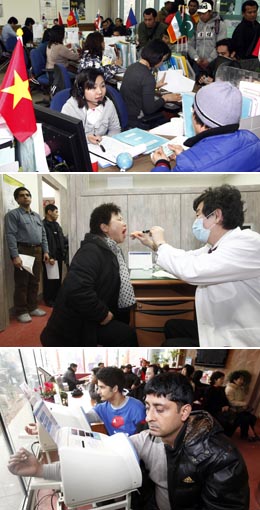 Top, Migrants’ Helpcall runs translation services in 10 languages out of its call center, open from Tuesday to Sunday, dealing with about 6,000 visits and calls a month. The other two photographs above depict the Ansan Danwon Health Center, which provides foreigners with various medical services free of charge, including dental work and general checkups. By Jeon Min-kyu

“As early as the 1980s a number of foreigners had flocked to Ansan and settled here,” said Kim Chang-mo, the director of the center. “This had to do with the Banwol-Sihwa industrial complex here in Ansan. As Korean workers who were involved in the so-called 3D jobs [for dirty, dangerous, difficult] at the industrial complex started to move out in the early 1990s, they were gradually replaced by foreign workers.”

The foreign population in Ansan is now about 34,000 from about 60 different countries, including 27,000 foreign workers and 4,000 marriage immigrants, accounting for 4.5 percent of the city’s total population.

“There was support from some religious groups and individuals for foreign residents in the early years, but with the foreign population exceeding 30,000, the city felt the need to come up with measures to deal with the town’s expat community for the sake of its existence and development,” said Kim.

Migrants’ Helpcall, which is the best known facility at the center, runs translation and interpretation services between Korean and 10 languages: Chinese, Vietnamese, Mongolian, Indonesian, Burmese, Pakistani, Thai, Sri Lankan, Filipino and Russian. All 10 translators are native speakers, except for the Korean assigned to Indonesian.

“We have about 5,200 visitors and 1,200 calls a month on average, which translates roughly into 200 cases a day, visitors and calls combined,” said Ahn Jeong-ja, an administrative official at Migrants’ Helpcall. “Unlike other workplaces, the busiest day for us is Sunday when migrant workers have the day off and have some time to come here.

“While we are located here in the Ansan Migrant Community Service Center, our services are not limited to people living in Ansan. We have visitors from all around the country, including even those from Jeju Island on weekends,” said Ahn.

Poe Poe, the Burmese translator at the agency, said, “Mostly I receive inquiries about how to report a change of workplace. Inquiries about what to do about delayed wages are also frequent.” Poe Poe, 33, goes by the name Kim Hana in Korea and has been working at the call center for about two years. She married a Korean, then moved here in 1994.

In the face of so many chronic problems, including delayed wages and sometimes harsh immigration standards, one might think Korea would lose its luster for workers from Southeast Asian countries. But Hwang at Migrants’ Helpcall said it does not “because the procedures for them to enter Korea are less complicated and less expensive compared to other [advanced] countries.

“Furthermore, most Korean companies offer foreign workers room and board, which is not the case in, say, Japan.”

That sentiment was shared by Hasan Nabik, who also works at the center.

“Korea is much more convenient for foreign workers than other countries and a favorable place because they can send about 60 to 70 percent of their earnings to their families back home with room and board provided in most cases,” said Nabik.

Nabik, 43, originally from Bangladesh, came to Korea in 1991 and settled here, marrying a Korean in 2005. Before coming to the center, Nabik worked at an auto parts maker in the Banwol-Sihwa complex.

Now he is part of the Wongok Special Patrol, another unique service of the Ansan Migrant Community Service Center. The nine-member crew was launched when the center opened in March 2008 by the Ansan government. It serves dual functions, helping foreign residents learn local laws on garbage collection, traffic safety and others, and offering linguistic and cross-cultural support in disputes with other locals.

Nabik and the Chinese immigrant Bang Gyeong-ho were specially appointed to the patrol by the government to act as interpreters and to be a calming presence for foreign residents in tense situations.

“Ansan has a large Chinese population in particular, and Mr. Bang, who is Chinese, can act as an efficient Chinese translator when quarrels or physical fights involving Chinese people occur. And Mr. Nabik speaks four languages - Korean, Bengali, Hindi and English - so he also does us great service,” said Hwang Yu-gyeong, the official in charge of the patrol.

Nabik has lived in Korea for about 20 years now and considers Korea his adopted home - so much so that he is currently going through the naturalization process to become a Korean citizen. Though he said he still feels discrimination against foreigners in Korean society, he attributed that to the country’s homogeneous history.

“It seems that many Koreans still find it awkward to think of a foreigner as one of them, an equal constituent member of society,” Nabik said.

Migrant workers can have trouble acquiring proper medical care, and people often say that it’s when one falls ill that one feels most homesick. That’s why the Ansan Migrant Community Service Center also houses a clinic, the Ansan Danwon Health Center Wongok Branch. It offers various medical services free of charge, including internal medicine, dentistry, ophthalmology, obstetrics and gynecology and even Oriental medicine.

The clinic also offers free checkups, which can be quite costly in general hospitals and are sometimes required as a condition to receive a work visa here.

“All foreigners, regardless of their nationality or job, are allowed to receive these medical treatments for free,” said Lee Young-hee, the manager of the Danwon Health Center. “It has been made possible thanks to a number of doctors who volunteer to treat foreign patients without a fee. We are all very thankful to them as we know that they are doing this despite their very hectic schedules.”

“Three doctors are on duty on weekdays, when we have about 30 patients a day on average, while dozens of doctors come to serve on weekends when this room is filled with more than 200 visiting patients,” said Lee.

Nancy Das, 29, from Bangladesh, was one of the weekday visitors. “I came here today for the fifth time for dental treatment,” said Das, who came to the center last Wednesday evening - the only weekday when the clinic is open at night. “Over more than five visits, I have had my teeth treated well. I’m very satisfied with all the services they provide here.”

Another patient, a 48-year-old ethnic Korean living in China who gave his name only as Zhang, said he comes to Korea twice a year to visit relatives, and they introduced him to the clinic six months ago.

The people at the Ansan Migrant Community Service Center hope to set an example for other governments in services they can and should provide to the growing number of foreign residents in Korea, and the center has new plans for 2010 to make Ansan even more welcoming.

“While Korea is now changing quickly into a multicultural society and the foreign population in Ansan also keeps increasing, Koreans and Ansan citizens’ awareness of foreign people and culture is still low,” Kim, the director, said. “So we plan to focus on developing various programs to raise the Korean people’s awareness of foreigners and various cultures this year.”

He added, “Furthermore, since Ansan has now become a role model of multicultural society, we will also come up with guidelines on future policies for other local governments.”