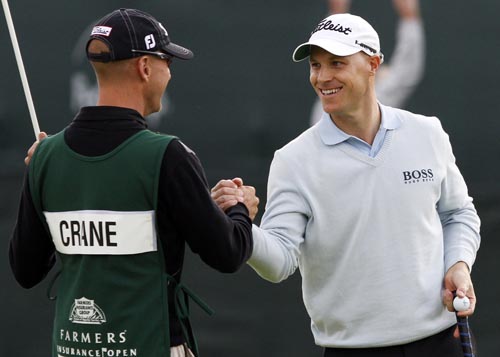 Ben Crane, right, is congratulated by his caddy, Joel Stock, after his one-stroke victory in the Farmers Insurance Open golf tournament at Torrey Pines Golf Course on Sunday in California. [AP]


SAN DIEGO, Calif. - Ben Crane was so locked into his strategy for Sunday’s final round of the San Diego Open he had no idea he had won the tournament on the 72nd hole. The 33-year-old American parred the last at Torrey Pines to triumph by a stroke but he only became aware of his achievement when told by playing partner Ryuji Imada of Japan.

“I didn’t know that I had won when it was over,” a smiling Crane told reporters after ending a victory drought of more than four years on the PGA Tour with a two-under-par 70.

“I didn’t know who was playing well. Certainly the cameras followed us most of the day, but I didn’t know if someone ahead of me made a good score.

“I had no idea really what was going on, and I’m thankful that I didn’t,” added Crane, who posted a 13-under total of 275 in the fourth PGA Tour event of the year.

“Someone said: ‘One-shot lead’ when we were going to the last hole, so I thought he might be right.

Crane, who sealed his first victory on the U.S. circuit since the 2005 Milwaukee Championship, had given his caddie strict instructions before the start of Sunday’s final round.

“I told him: ‘If we get into a situation where we might need to know what to do or to make a different decision, then you’re in charge of that.’

“So he was watching the leaderboards and that 18th hole for the most part is not reachable for me so I really can’t imagine a situation where I’m going to make a different decision.”

As it happened, Crane found the right rough off the 18th tee, laid up in two and struck a wedge that spun back to the front of the green before he settled for a par five.

“I can’t imagine I’d really need to make a different decision on the last hole based on the circumstances, so we just kind of left it at that,” Crane said after booking his place in this year’s Masters and PGA Championship.

Crane, who is known for his slow pace of play, began Sunday’s final round two shots behind the pacesetting Imada but forged two ahead with three birdies in the first five holes.