Keane joins Celtic as a loaner

Keane joins Celtic as a loaner 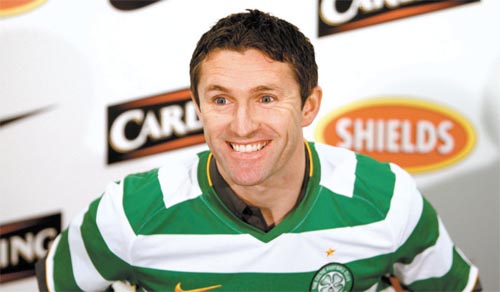 
LONDON - Ireland skipper Robbie Keane left Tottenham Hotspur on loan to Celtic on Monday, a year after rejoining the Spurs from a short-lived run with Liverpool.

Keane, 29, who scored nine times for the Spurs this season including four in a 5-0 win over Burnley in September, originally joined the London side in 2002 and netted 91 goals in 226 appearances in his two spells at the club.

Manager Harry Redknapp used Keane as part of a rotating strike force with Jermain Defoe, Peter Crouch and occasionally Roman Pavlyuchenko, but he has been allowed to leave on loan following Eidur Gudjohnsen’s arrival at White Hart Lane last week.

“It’s a good move. Robbie needs to play,” Redknapp told Sky Sports. “He’s too good a player not to be starting here regularly. He wants to play all the time.

“It’s been difficult to guarantee Robbie a starting place. He’s not a happy man when he’s not playing regularly,” Redknapp added.

Keane also has the option of making the move to Celtic a permanent one.

He has played for the Wolverhampton Wanderers, Coventry City, Inter Milan and Leeds United during an outstanding career, and is Ireland’s record scorer with 41 international goals in 96 appearances.