District office under fire for texts

District office under fire for texts 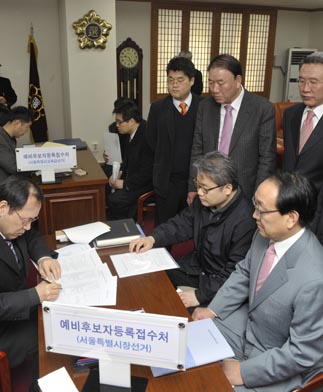 Jung District head Jeong Dong-il’s office is under investigation for allegedly sending a text message to 37,000 district residents in November in violation of the election law, Seoul Jungbu police said on Monday.

On Friday, police raided the district office’s computer database and network room and confiscated documents and other records, police said.

“Sungdong High School has been named a self-regulated high school! This is the result of district head Jeong Dong-il’s efforts to create prestigious schools in the district,” the text message read.

“We’re investigating whether Jeong actually directly ordered that the text message be sent, and whether there are other charges that could relate to him,” a Jungbu police officer said.

To deter campaign scandals before the June 2 regional elections, the Ministry of Public Administration and Security yesterday opened a clean election support center, which will man a special inspection team to oversee campaigns and crack down on any wrongdoing. The center will work closely with the National Election Committee, National Police Agency and local governments to monitor campaigns on a 24-hour basis.

Police ordered 261 police precincts to activate investigation teams to check for election illegalities. The election committee has increased the staff monitoring illegalities to 70,900, and people who report illegal campaigning can receive a reward of up to 500 million won ($431,000) from the committee.

Meanwhile, candidates for the regional elections, including contenders for superintendent of regional education offices and local government heads, started to sign up yesterday. Candidates for posts as city mayor, district head and city council can register their candidacy as of Feb. 19. Those who want to run for county head and county council will be able to register beginning March 21.

Political circles are paying close attention to the June election, as its outcome will reflect public sentiment over the Lee Myung-bak government. Public opinion is divided over President Lee’s decision to modify the Sejong City project from an administrative hub into an “education and science-centered city.”